Hermit Pass is one of the most beautiful trails in Colorado, and it's a fairly mellow drive all the way over 13,000 feet. That's why we made sure we got to see it on our way down to Alamosa.

It was supposed to rain, so we were prepared. When we started out, though, it was really nice. It wasn't hot and it wasn't raining. It was perfect weather for wheeling.

There weren't too many people on the trail as we worked our way up. Don heard a noise coming from his Jeep and couldn't figure out what it was, but eventually he found his trackbar bolt was really loose. He tightened it up and he was good to go.

We had lunch soon after starting up the trail. We found a nice, wide, flat area where we set up and had a great lunch. We were so relaxed we weren't in much of a hurry to get going again.

We worked our way up to timberline, then passed the trees and up to the lakes. It was beautiful. We looked back and it was pouring rain on Westcliffe and our trailhead, but we were still in perfect weather.

It was cold and windy at the top, but that was to be expected. We walked out to the edge to check out Horseshoe Lake and the views back toward Westcliffe where it was still raining. We put in windows and got ready to drive down into the rain.

While we were at the top, the clouds really started rolling in. We were surrounded by clouds and it was still so gorgeous!

We drove down and out of the clouds and found that the rain had ended and the trail was just a little bit wet from the earlier rain. We didn't have any issues on the way down, though Gary was hearing a weird noise. He found out that his front fender was really coming off -- probably some damage he got on 21 Road the month before.

We got down to Westcliffe and we managed to make it through the trail without actually getting rained on. We aired up and went south to find a new trail and a new way to Alamosa. 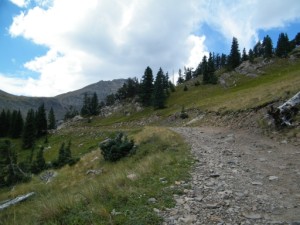 Led by Monica I.
What would a trip to Alamosa be without Hermit Pass on the way? It’s one of our favorites so we had to visit it again. We had a nice trip to Westcliffe where we found a gas station and a big lot where Mark could leave his truck and trailer….
Join Us!
If you aren’t a Member or Subscriber, you can’t see all of the content on this site. Get membership information to see why this site is best when you join and log in