We had a nice, big group and what looked like perfect weather as we all met in Johnson Village. It wasn't long before we were aired down and starting the trail. There were lots of ATVs, dirt bikes and other 4x4 vehicles, so it looked like it was going to be a crowded day.

We got to the trailhead for Pomeroy Lakes and we did that trail at that point. It was a great time, but it wasn't long before we were back on Hancock Pass.

We were looking forward to seeing the Allie Belle Mine, and it was just as crazy-looking as it was in the pictures. We didn't stop, though, because there were 10 vehicles in our group and nowhere to park that many. There were a few vehicles there ahead of us, and more coming in the opposite direction. We snapped a few pictures and kept going.

The Hancock townsite had a lot of parking, but someone was camping there and we didn't want to disturb them. So we kept going there, too. We had called the forest service the day before and they said that Williams Pass wasn't open yet, so we were going to skip it. We kept going, up to the lake.

The drive to the lake was a bit bumpier, and we enjoyed it and the scenery. It wasn't long before we were parked. There were lots of other cars and ATVs, and lots of people at the lake. We took a quick look but didn't hang out at all. We were soon back in our vehicles and back on the trail.

We got back to the intersection and turned up to go to Hancock Pass, and that's when Monica's rear shock mount broke. We barely managed to get it off of her Jeep before more traffic was on its way down. It was even busy up on the way to the pass.

We really enjoyed the final bits of the climb to the pass. It was really rocky, and there were some fun and challenging spots. When we got to the top, we had it to ourselves. It was nice to be somewhere chilly after all of the heat in Denver recently. We hung out for quite awhile, really enjoying ourselves.

The way down was very scenic but not as difficult. We passed the trailhead for Tomichi Pass, planning on coming back that way later. We had the Alpine Tunnel to see, first.

We ran across a lot of ATVs coming out from the Alpine Tunnel road as we were going in. The scenery was fabulous! The drop-off was pretty crazy, too.

When we got to the other end of Williams Pass we noticed that the gate was open! Apparently the forest service didn't know that their road was open for the season. We decided to check out the tunnel first, and then do Williams Pass on the way back.

The parking area for the Alpine Tunnel was crowded, but everyone got a space. We checked out all of the old buildings, and most of us walked all the way to the tunnel. It's caved in now and not much to see, but the concept was pretty cool.

Hancock Pass was a really nice trip, but we were antsy to get on Williams Pass. We headed back just a little way to the trailhead, and then we were on our way. Hancock Pass is definitely a new favorite.

Use the arrows or dots to flip through the previews of the other reports for Hancock Pass. Click one of them to read more and see all of the photos from that day. 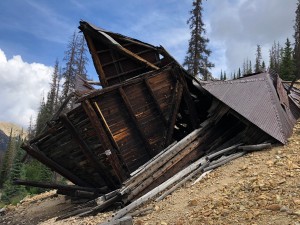 Led by Matt K.
It was overcast and raining on and off while driving to our meeting place, so we thought that it was going to rain all day. We had to drive through a few rainstorms, but at the gas station in Johnson Village it was nice and sunny out. But there, too,…
Join Us!
If you aren’t a Member or Subscriber, you can’t see all of the content on this site. Get membership information to see why this site is best when you join and log in