Trail Run on May 21, 2010
Report and photos by Monica I., Trail Leader
View trail information for Green Day

It was our third day of trails and it seemed like we might all end up as a group on a single trail, but it still didn't happen. Julie, Mark, Roger and Robert all started the trail together, playing around in the rocks near the start of Helldorado on the way there. It was a slow start for us, allowing Bob and Andrew to catch up with us before we were very far into the trail. Unfortunately, Andrew found out that he still wasn't completely fixed right off the bat, so he turned around and headed back to town after lunch.

Robert played on the optional waterfall, trying some crazy lines. He almost tipped over, though, and that was enough playing for him. He walked right up the regular way. Bob and Mark both walked up the waterfall, as well.

Robert, Mark and Bob all dropped into the Boulevard while Julie and Roger took the easier route around it. We were fully expecting to spend a lot of time in the Boulevard like we always do, but it was a pretty quick trip this time.

No one had any trouble at all on the Wall, which was a nice change. Everyone had a good time showing off their rig's flex on the twisty rocks.

It really got interesting when we got to the Wedgy, though. Robert walked right up and over it, like we were all expecting. He made it look really easy. It wasn't going to be so easy for Mark and Bob, though.

Mark tried a few lines, but nothing was working. He almost made it a couple of times, but he was still getting used to his recently modified Jeep and he just couldn't pull it off. Then he suddenly ended up on his side in the obstacle. He has wide tires, and those kept him off of most of the rock. He was grinning from ear to ear, but he ended up going around the big crack.

Bob brought up the rear, and it really looked like he had the Wedgy down pat. But then he ended up with his rear passenger-side tire wedged under the big rock and he was getting a wheel up in the air. We strapped a tow strap to his high side as he tried to slide around the rock, but it wasn't happening. He ended up having to get pulled up and through the obstacle. Next time!

When we got to the Diff Ledge we were both sad and happy to find that the rock had been moved. There was no longer an obstacle there. Maybe it'll end up getting moved again for future years.

The exit was easier, again due to a missing rock. Robert walked right through it like it wasn't even there. But then Mark found a nice, big hole with his rear tire and suddenly he was nearly flopped over. Again! He was definitely getting his money's worth on this trail. Robert came back to winch him down and then he drove out of the exit.

Bob came through and he didn't have any issues. He was up the last bit of rocks, and then the whole group was back together again.

Robert, Mark and Bob all went up the sandy hill and the additional rocks. Julie and Robert went around to the right to meet them. We found an additional section of difficult trail that led up some rocks to the top of the hill. Half of us went up while the other half went back down to the sand and across to finish the trail. The other half met up at the finish once they were done playing.

When we came off of the trail, Mark made a wrong turn and ended up lost for a bit. Robert and Bob found him, but it would be a joke at Mark's expense for the rest of the week.

When we got back to Helldorado a few of us played in the rocks. We were calling it "Mark's Challenge" because he couldn't get through it at the start of the day. He had a bit more practice, though, and he got through it this time.

Robert did the first obstacle on Helldorado just to play, and his Jeep looked amazing. He has a ton of flex, and the thing is huge. Bob followed him through, flexing his way easily through the big rocks.

Mark came through last but he didn't get far. He came down off of the first hill of rock and started up the next hill, but then his tire came right off of the bead. He was stuck at an impossible angle, so Robert winched him back to level rock. The guys used lighter fluid and a lighter to pop it back on the bead and Mark was good to go.

We'd all had about enough at that point so we headed out for dinner while it was still light. It was a great day of fun! 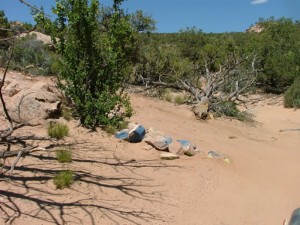 Led by Monica I.
We did Green Day right after doing Minor Threat, and we felt like we were up for the challenge. We had heard that Green Day was easier because of all of the bypasses, but for most of us who didn’t take the bypasses it ended up being much harder. We…
Join Us!
If you aren’t a Member or Subscriber, you can’t see all of the content on this site. Get membership information to see why this site is best when you join and log in