We had just completed Poison Spider Mesa and Golden Spike, and we were happy to realize that we'd be finishing Gold Bar Rim before it was dark. That rarely happens! We finished up Golden Spike and the group behind us passed us as we turned right to play on the final Gold Bar Rim ledges.

Don went up the second-to-last ledge and then down the last ledge without any issues. Michael did the same thing and also didn't have a problem. The rest of us admired the view from the overlook.

We headed down and the other group pulled to the side to let us pass them. That was the last we saw of them. The trip down was a fun one over slickrock, and the steep section was a good time.

We weren't hurrying, but the trip from the top of the overlook went by pretty quickly. It wasn't long before we were at Slide Rock.

Mike C. thought he'd have issues without lockers, but he powered right up it. Bob tried crawling it at first but that didn't work, so he used the skinny pedal to cruise right up it to the top.

Mike S. just couldn't find the right speed. Crawling wouldn't work, and though he tried a bit more speed later it still wouldn't get him to the top. Instead of even more speed, he used his lockers instead and slowly he spun to the top.

We were all past Slide Rock so we were home free. Everyone bypassed the optional ledges section but then when we got to the Undercut Ledge, Don and Michael couldn't resist.

We've spent some time at this big ledge on past trips, with other members working on it. Some have made it and some have had to admit defeat. Unfortunately, neither Don nor Michael made it this time. It's definitely a tough ledge!

We all skipped Improbable Hill this time, and soon we were out and over Gemini Bridges Road to the trailhead. The sun wasn't even down! We headed into town for a great Mexican food dinner. What a fantastic day doing the Trifecta. 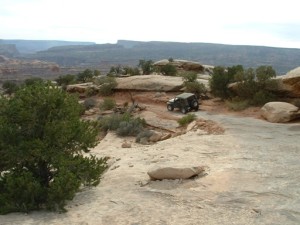