We had a big day planned, and we'd spend a large part of it above timberline near the Continental Divide. It had been raining nearly every afternoon in Denver, and we hoped to escape it while we were in the high country. We planned on finishing with S.O.B. Hill and we knew that rain could make that difficult to impossible. We aired down in Jefferson and headed up to the pass.

The trip on the southern end is usually fairly uneventful, and this time was no exception. It didn't take us long to get to the pass, where we found a couple groups of people far off of the trail on the tundra above timberline. They were too far to talk to, so all we could do is watch. Stay on the trail, people!

Part of our trip was to check out Glacier Ridge, because we heard it was closed. With fingers crossed, we went to the trailhead for that trail and found it blocked by a long fence. It was such a great 4x4 trail, so we were pretty bummed. It would be a good but steep hiking trail for others, now.

We went back to the pass and headed down the other side. This side is always a lot more fun. It was rocky and twisted in many places, and we enjoyed it. We saw a few more people abusing the trail a bit, and then we stopped for a break near a hiking trail in the parking area there. The recent rains brought the mosquitoes out in full force, so we didn't hang out for long.

There were a few fun water crossings over the South Fork of the Swan River, and then we got to Moe Cabin. We found a smoking campfire, trash everywhere, and no one in sight. It was very sad to see. We stopped to put out the fire completely and then started cleaning. There was a lot of broken glass and evidence of a party, and we filled up our Jeeps with garbage. It took a while, but we left it as nice as we could.

It didn't take long to get to the northern end. The clouds looked menacing so we put tops back up and windows on. It started hailing as we were finishing up with that, so the timing was good. Other than the idiots and evidence of idiots, Georgia Pass was a nice trail. We kept going to head up the Swan River trail. 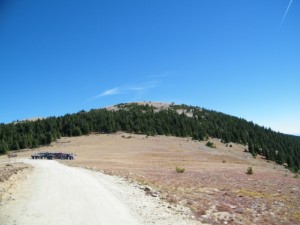