Trail Run on May 13, 2018
Report and photos by Monica I., Trail Leader
View trail information for Echo Park

This trail is buried in Dinosaur National Park, so we did Harpers Corner first to get to the trailhead.  We decided not to air down, so we headed down the dugway right away.  It had been very dry, and conditions were good.  Though it's steep and the switchbacks aren't huge, it was an easy descent.  It would be easy for most vehicles, though RVs should stay on the pavement of Harpers Corner.

Our first stop was at Chew Ranch, which was pretty cool.  We had the place to ourselves, so we took our time wandering around.  It was shady under big cottonwood trees, with lots of green grasses.  There were some good information signs, but mostly we just checked things out ourselves.  We weren't sure if the house was off limits or not (it looks like it is) so we stayed away from it.  We checked out barns and things, though.  It was really interesting.

The Pool Creek Petroglyphs were really nice.  It definitely wasn't the biggest panel we've seen, but it was over a small creek.  That meant more shade trees and grasses, and it was nice to have that type of relaxing coolness in the breeze of the area.  We hung out for a while, pointing out what we could find on the big rock.

Whispering Cave was cool, though no one went back very far.  We didn't have flashlights prepared, and no one was up for spending a bunch of time there.  We enjoyed the cool sand and walls, and we were thankful when we all escaped without incident.

We did a drive-through of the campground and found some people with really cool set ups.  The campground is pretty awesome, though you'd need a smaller rig to get there because of the dugway and single-lane trails on the way there.  They had lots of trees and they were right next to the water.

We stopped at the pit toilets for a bit and then we were off.  We turned to take Yampa Bench on the way out.  It was really cool down here, and we were looking forward to checking out the rest of the valleys. 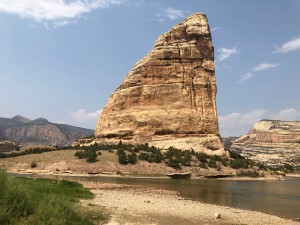 Led by Matt K.
Echo Park is a dirt road, unlike Harpers Corner. At the end of the switchbacks not far into the trail, Matt ran into a group of fire fighters doing some training in the dry shrub and grassland next to the road. We asked if they needed help, but they said…
Join Us!
If you aren’t a Member or Subscriber, you can’t see all of the content on this site. Get membership information to see why this site is best when you join and log in