Echo Park is a dirt road, unlike Harpers Corner. At the end of the switchbacks not far into the trail, Matt ran into a group of fire fighters doing some training in the dry shrub and grassland next to the road. We asked if they needed help, but they said they were training. It was fun to see.

Matt and his family stopped at the Chew Ranch and walked around some. The old homestead was pretty cool. We liked the side-by-side outhouse (the door was missing, to boot) and the caved-in root cellar.

The Pool Creek Petroglyphs were nice. The petroglyphs were high up on the cliff and in very good shape. We were trying to figure out how the ancient people drew them there, but the signs said that the canyon wouldn’t carve out to its current depth until after the petroglyphs were carved, so they used to be at about a man’s height off the ground.

When we got to Whispering Cave, we of course had to stop and go into the cave. Matt tried to go far back to the left, and to the right, but the space was not quite big enough to go far. We looked up and saw how the cliff was split into a cleft very far into the whole cliff -- it was amazing to see. It was nice and cool just inside that little opening. We could hear and feel the wind going through the cave, though we could not see where it came from.

At the end of Echo Park, Matt and his family stopped near the day-use beach and walked down to the river right in front of Steamboat Rock for a short break.

After spending some time at the river, Matt made his way back to Harpers Corner Road and connected from there to County Road 16 West to go back to Vernal. It was a nice day of sightseeing. 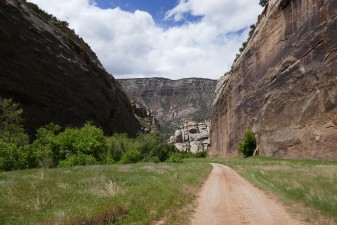 Led by Monica I.
This trail is buried in Dinosaur National Park, so we did Harpers Corner first to get to the trailhead.  We decided not to air down, so we headed down the dugway right away.  It had been very dry, and conditions were good.  Though it’s steep and the switchbacks aren’t huge,…
Join Us!
If you aren’t a Member or Subscriber, you can’t see all of the content on this site. Get membership information to see why this site is best when you join and log in