We ran Eagle Rock right after doing Saran Wrap so we were already having a great time. We knew there was a large group or groups ahead of us so we were preparing ourselves for a long day in traffic. The big dirt hill has been closed off, so we started up the trail. There wasn't any snow and hardly any mud. We were soon behind a line of traffic playing on the first big poser rock. We waited for a while, and started to get our lunches out but, it wasn't very long before the line was moving again.

We were soon to the back of the line again, and this time we decided to pull off the trail for lunch as we had enough room to park and there was a clearing near the stream. We all enjoyed the sun and felt good that no one passed us as we waited for the trail to clear ahead. One truck came back down and we heard some radio chatter asking if anyone had a welder. That didn't sound good at all!

We packed up from lunch and were soon at the bottom of the first obstacle. There were some 4x4s parked off the trail there and one of the drivers spotted Mike up the far right side of the obstacle. After one false start, Mike was up. After a brief conversation with the spotter, he drove up the trail to make room for the others. Everyone quickly drove through with no pause for pictures. After checking with the driver of the broken rig and determining there was nothing we could do to help him, we left him with his buddies and continued up the trail. There was no one immediately in front of us now, and we worked our way up through the rocky sections in good time until we got to the next major obstacle.

Mike worked his way through followed by the others. Ryan got hung up and needed a strap to get over the rocks. Gary also had difficulty here, trying a couple lines until he slipped sideways and ended up high centered. He needed help getting off the rock, and after a couple attempts to strap him forward, he decided a different method was needed. Jeffrey came back down beside Gary and tried to pull Gary to the right and off the rock. All this did was end up getting Gary sideways on the trail and quite tippy. By this time, a couple Jeeps had come up the trail. The first one was fittingly a yellow CJ, and he winched Gary back off the rock. Gary then made it up the right side of the obstacle without any further issues.

We then made good time up to the last obstacle where there was a group having lunch. We worked our way through the obstacle and around them and were soon out onto into the open spaces and on our way out towards the start of Bull Park trail. We all had a good time, and our new member, Ray, got his first trail damage in the form of a large scuff on his front bumper. He didn't seem to mind too much because he already had plans to replace it. He must have wondered about Ryan's choice of trails for him to break in his new Rubicon! 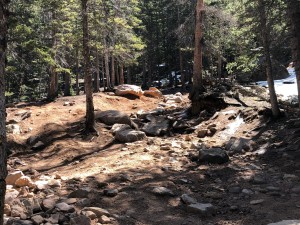