We had one last trail to do, the one that would connect us to the town of Eagle and I-70 so we could head for home. It had been a long and fun day and we expected an easy trail all the way north. It didn't end up being as easy as we originally thought.

It was very muddy in spots right from the start. We saw a Jeep coming down the trail at the southern switchbacks and we stopped to chat with the driver. His tires were huge because they were packed with mud. He said it got very slick where we were going. We decided to keep pressing on.

It was definitely slick as we climbed. Some of the muddy spots were actually pretty deep. We had the advantage of going uphill so we could keep some speed. The Jeep we met on the way was traveling downhill and couldn't go quickly so the Jeep's driver was at a disadvantage. No one had any issues with the mud though it was definitely slippery.

We made it up to Lime Park and the scenery was gorgeous. We took a few pictures of the puffy strings of clouds. It looked like we might see the sunset on the trail.

We came around a corner and headed down a mellow hill and suddenly Hoa slid off of the side of the trail with his front end in the drainage ditch. He was okay and he didn't hit any cows, thankfully. The mud there was slick and sticky.

Bill was behind him so he tied a tow strap to his rear bumper and Hoa's rear bumper. It was quick and easy work to drag him out of the ditch. We all noticed that our vehicles were covered in mud, and now we had very, very muddy shoes. We brought the mud into our vehicles as well and pressed on.

We didn't stop at Crooked Creek Reservoir. We got lucky and the trail there wasn't muddy. It's pretty narrow and it drops off on both sides so sliding there would be bad.

At the pass we saw another vehicle headed in the opposite direction. The driver said that the trail behind them was just fine. We told him about the mud he was going to find and then we parted ways.

He was right, the rest of the trail was no problem. Still, it was dark by the time we got to Sylvan Lake. There were quite a few campers and RVs there, and we didn't stop.

It felt like it took a long time to get off of the trail and out to Eagle. We stopped at the Eagle Diner just in time to order dinner at 8:15PM. A few of us skipped dinner to head for home.

On the way home, Julie's Jeep started misbehaving. It turns out that she got her alternator wet and fried it, and by the time we got to Denver she was losing her headlights. She made it home with Hoa's help but didn't get there until almost 1AM.

It was a long day but a really fun time. We're already planning on doing it again but in the opposite direction. We like running new trails, and there are lots of other trails to explore in the area. 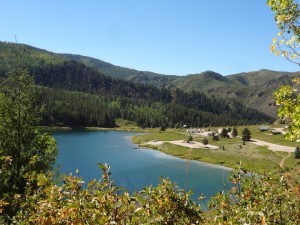 Led by Monica I.
We had been trying to organize a long weekend around Sylvan Lake for the last couple of years, but it wasn’t meant to be. This year, we had a three-day weekend of trails planned, and it promised to be a good one. We were all camping at Sylvan Lake, and…
Join Us!
If you aren’t a Member or Subscriber, you can’t see all of the content on this site. Get membership information to see why this site is best when you join and log in