We had been trying to organize a long weekend around Sylvan Lake for the last couple of years, but it wasn't meant to be. This year, we had a three-day weekend of trails planned, and it promised to be a good one. We were all camping at Sylvan Lake, and we ended up traveling separately to get there. Walt was there a day earlier, and Monica was running late. We were all set up at the campground by early afternoon, where we aired down and got our stuff together. Then we headed out to do a few trails before the sun went down.

We'd already done the first section of the Eagle-Thomasville Road on the way in, and it's a pretty easy road up to the campground. It's paved most of that distance. We were heading south, though, so it would be all dirt for us the rest of the way. We passed a huge logging truck as soon as we got started, and we were glad to have passed it at a wide spot.

The weather was perfect, though it seemed like it would be chilly for camping. We talked about our previous trip there when the trail was wet and slick, and we were happy to find it dry. There wasn't any rain in the forecast until we were done with trail running for that trip, so we were good.

It was very scenic, and it didn't take long to get to the southern end. We thought we'd find a new trail by Ruedi Reservoir, but we had it mapped wrong and we didn't find it (we'll find it next time). We did find the Thomasville Lime Kilns, though, and we hung out there for a while just marveling at the construction. They still stood there, and so much of the hill across the Fryingpan River was gone because of them. It was pretty interesting.

After a little bit, we decided to head back in and check out a couple more trails. It looked like it was going to be a great weekend. 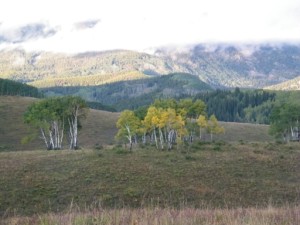 Led by Monica I.
We had one last trail to do, the one that would connect us to the town of Eagle and I-70 so we could head for home. It had been a long and fun day and we expected an easy trail all the way north. It didn’t end up being as…
Join Us!
If you aren’t a Member or Subscriber, you can’t see all of the content on this site. Get membership information to see why this site is best when you join and log in