Trail Run on May 20, 2012
Report and photos by Monica I., Trail Leader
View trail information for Dolores River

We were heading for home with dirty Jeeps and mild sunburns. We had a long day planned, though it ended up being even longer than we anticipated. We stopped by the Cave House next to highway 128 and the Dome Plateau trailhead on the way there, just to check it out. It was a good stop. Then we aired up next to the burned Dewey Bridge before heading to Dolores River.

We found the trailhead easily enough and it looked like we had the place to ourselves. When we could see the sand bar we were happy to find it pretty exposed, so it looked like our watery plan was on. When we got to the water there were a bunch of people playing and swimming and they watched us drive into the water.

We all went to the sand bar and decided we were up for it, so Monica started across. The first river crossing was deep and fun, and she didn't have an issue. The water came up over her rocker guards and tires.

Julie came through with her new Jeep and she saw a bit more of the water. It came in through the seals in her closed doors, soaking the carpet, but she made it through without any problems. Walt and Mike followed her through, splashing and having a blast.

We intended to take Scharf Mesa out, but we weren't leaving without going through the second river crossing, too. So we'd need to do a bit of backtracking. We found more people at the next crossing, and they watched us go through.

The water was deeper at the second water crossing this time. Monica went across, and then everyone else followed. You have to drive upstream for a bit, and that part was shallow, thankfully. It was a really good time.

We drove out to the end of the trail and discussed if we were ready to head to Colorado. We were, and we voted on which crossing we'd do again. We all voted to do the second water crossing again, this time in the opposite direction. That part of the trail is shorter and easier, anyway.

Mike had found an easier line on the way through the first time, so Monica took it. She turned before getting to that bit of sand bar, driving just above where the little water rapids started. It was deep enough to float her a little bit, but not too much. Good times! She got out to film everyone else going through.

Julie came through, getting some good floating time in just before the other side. She soaked Monica up to the knees in the lukewarm water. Surprise! She stayed there getting a couple more soakings as Walt and Mike came through. They may have floated a little but it wasn't too bad.

This trail is such a blast! We need to do it more often. We headed over to do Buckhorn Mesa for a short distance to get to Scharf Mesa. Goodbye for now, Moab. 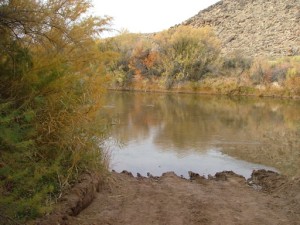 Led by Monica I.
We did the Dolores River trail last year, and it has really changed since then. They have graded the entire trail, making it wide and smooth where it had a few bumps the year before. They even graded the sand bar at the first river crossing. It’s kind of sad,…
Join Us!
If you aren’t a Member or Subscriber, you can’t see all of the content on this site. Get membership information to see why this site is best when you join and log in