We did the Dolores River trail last year, and it has really changed since then. They have graded the entire trail, making it wide and smooth where it had a few bumps the year before. They even graded the sand bar at the first river crossing. It's kind of sad, turning a trail into a road. The river crossings are still the same, though, so the trail is still a challenge.

We started our day by airing down at the Dewey Bridge. Seeing it burned and mostly gone was depressing. It wasn't long before we had found the Dolores River trailhead and headed down to the river.

We knew where the first river crossing was this time, so Mike stopped at the first sight of it to take pictures from a new angle. Jeffrey stopped at the next view of it, at a slightly different angle for even more unique pictures. The rest of us headed down to the river.

There was a lot of dry land at the sand bar, so we figured that the water wouldn't be too deep. It was still deep, but no one floated at any point. The sand bar was graded, but the rocks in the river were still there. Monica, Michael and Roger all went through in a line.

Jeffrey and Mike left their posts and crossed the river in style. You could hear water hit Mike's fan for just a second, but then it was gone. That crossing is still so much fun!

When we got across the river, we turned right instead of left. We had big plans to explore the Dolores Triangle, and we left the Dolores River trail via the end of the Buckhorn Mesa trail.

After doing a few more trails and many miles we finally came back to the Dolores River trail where we had left it. Unfortunately, it was very nearly dark. It was also very, very dusty. We all spread out, trying to breathe in the dust. It was weird dust, and it hung in the air like a fog for a very long time.

The second river crossing was also fun, but we did it in the dark. That made it pretty cool to do but pretty bad for pictures. No one had any issues, and everyone enjoyed it.

We stopped for a bit on the other side to put in windows because it was getting chilly. With the road graded as it was, it didn't take us long to finish the trail and end up back at the Dewey Bridge to air up and head back to town. This is always a great trail, especially with the detour into the Dolores Triangle. We're definitely going to include Scharf Mesa West whenever we do Dolores River. It was a fun day! 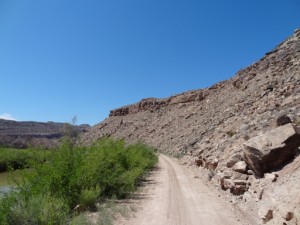 Led by Monica I.
We were heading for home with dirty Jeeps and mild sunburns. We had a long day planned, though it ended up being even longer than we anticipated. We stopped by the Cave House next to highway 128 and the Dome Plateau trailhead on the way there, just to check it…
Join Us!
If you aren’t a Member or Subscriber, you can’t see all of the content on this site. Get membership information to see why this site is best when you join and log in