We ran all the way to the end of Peru Creek, then came back to check out Cinnamon Gulch. With all of the mines and buildings we could see from Peru Creek, we figured this would be really scenic. We were definitely right about that.

The first place we went to was the big building to the right of the trail. A lot of it was still standing, though there were ruins all around it. It was pretty cool, and everyone snapped a lot a pictures. We spent a bit of time exploring, then we headed down the trail.

The topo map showed that the trail went through and connected back with Peru Creek, but it quickly ended with many logs and rocks across the trail. We had to turn around, which wasn't easy. We ended up going around the back of the mine and out.

We went up and across to see the Pennsylvania Mine, which was cool. We didn't explore much, though. Walt was hearing a weird noise, so Gary walked alongside Walt's Blazer to listen. Of course, it wouldn't make the noise when Gary was listening. Walt hoped for the best and we continued on.

We saw yet another mine on the side on the way up, but we didn't go in to explore.

The trail kept getting more beautiful, and it got a little bit rougher the higher we climbed. We soon saw that the regular trail was marked closed. It seemed that the trail continued on in a different direction, but we eventually decided that we were driving on tailings so we turned around.

Walt tried again to find what was making the noise, but no one could find it. We decided to head on down the trail.

When we were about back to the Pennsylvania Mine we picked up Cheryl and Dane on the CB. They were at the trailhead for Walden Gulch and on their way in. We decided to meet them and run Chihuahua Gulch together.

We worked our way out and headed down Peru Creek to meet them, and decided that Cinnamon Gulch was a new favorite for the scenery. We'd like to come back when the weather is better and explore it some more. 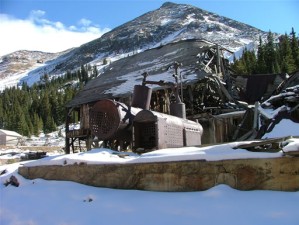