Castle Gulch was a big disappointment. We saw on the Motor Vehicle Use Map (MVUM) that it no longer went down to the pavement, but the map showed that it looped back up to Left Hand Canyon. We decided to do the loop but it wasn't to be.

The trail starts where Left Hand Canyon ends so we did that trail first. Castle Gulch was a bit rockier, probably because not many people are on the trail anymore. There are signs near the top that state that the trail doesn't connect to the pavement.

Still, we had fun on the rocks. We passed a place where they were restoring a hill and there was new fencing. Then we passed a few more spurs that went to private land. Just before getting to the place in the trail where it turns back to Left Hand Canyon we came to a gate right in the middle of the trail.

Monica called on the CB to tell everyone to stop where they were and turn around wherever possible. There was barely enough room for her to turn around along with Bill behind her. It was marked as "private property" on both sides of the gate (what does that mean?).

The place where they're doing the restoration is probably the best place to turn around because there is a lot of room for lots of vehicles. Either that or turn around just at the bottom of the rocky hill.

This definitely isn't a favorite trail for us, even though the rocks are pretty fun. It would be really difficult to pass someone now that it's a two-way trail. What a bummer. 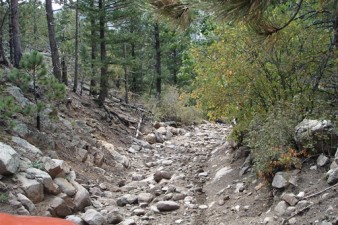 Led by Dane R.
We started Castle Gulch at the northern end, where it meets up with the Left Hand Canyon trail. The first half mile of the trail was mostly easy dirt road, but there were some sections that had some decent-sized rocks that completely covered the road. There were a couple of…
Join Us!
If you aren’t a Member or Subscriber, you can’t see all of the content on this site. Get membership information to see why this site is best when you join and log in