We started Castle Gulch at the northern end, where it meets up with the Left Hand Canyon trail. The first half mile of the trail was mostly easy dirt road, but there were some sections that had some decent-sized rocks that completely covered the road. There were a couple of fun sections where the rocks were large and round enough to roll around under our tires as we drove over them.

At a half-mile from the intersection with Left Hand Canyon, we turned right along Forest Service road 287.1. This took us to the Victor Mine, where there was a long tunnel leading into the mountainside. There was bright yellow water flowing from the tunnel, which made a bright yellow pond. We took a couple of pictures of the mine, and then the camera batteries died.

We turned around and went back to the Castle Gulch trail. The rest of the trail was an easy dirt road. We followed it south all the way down to the pavement at County Road 94. Near the end of the trail, there are many spurs that lead to private property, so we had to watch for the signs to help us stay on the forest road.

Castle Gulch road proved to be a nice exit route after running Left Hand Canyon. We had dinner at the Old Chicago on the Pearl Street Mall, where we watched the CU/CSU football game with a lot of angry CU fans. It was a fun day, and we only saw three other vehicles on the trails. We didn't have any groups behind us, so we were able to take our time and play when we wanted to. Best of all, there was no damage to the Jeeps. 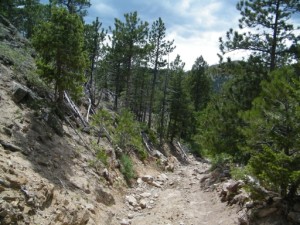