Trail Run on May 12, 2011
Report and photos by Monica I., Trail Leader
View trail information for Bull Canyon

Bull Canyon was our last trail of the day. It wasn't quite dusk yet but it was getting close. Luckily it wasn't far to the parking area to go view Gemini Bridges.

When we were there last, years ago, you could drive to within a short walk of the bridges. Now we had to park way back and walk in. In addition, they had closed the sand hills. Those were the best parts of the Bull Canyon trail so we were bummed.

Still, the scenery below Gemini Bridges is pretty impressive. Matt and Terry hiked around and climbed some rocks. They even got in the crack which was cool. We enjoyed ourselves there.

There was a trail marked "dead end" that we either hadn't seen before or wasn't as obvious before. We'd never been down it. Bonus!

We went to the "Y" and then up the right fork. It looked like the trail just ended so we stopped at the turn around and walked down. Yep, it was blocked and there was nowhere to turn around at that end so we made a good call. By the time we got back, Austin and Roger said they were going to head out so we split up at that point. The rest of us went to the mine.

It was cool to find a mine that was still open a little bit. We explored it a little while but it didn't go very far. So we headed back almost right away.

On the way back there is an "S" shaped section of trail in the sane. Monica said on the CB that it would be fun to go fast through it and she was already on the other end and there was no traffic. Why not, right? Mike went flying through it but got surprised by the tight curve. Instead of curving he went into the rock on the side, hitting his bumper hard. He had a flat tire so he carefully drove up and out of it to the flat spot just past it.

That's when he discovered the rest of the damage. His front control arm bracket was ripped and sideways. His axle was shifted to one side because his drag link was bent. Everything looked pretty bad. But it drove just fine and he worked his way off of the trail. Monica and Ladd checked out the overlook on the way out. We'll have to come back another time when everyone can enjoy it.

Mike drove his Jeep back to Moab and it didn't even pull to one side. He had the guys at the Outpost check it out and they said to be careful but that he could probably drive it home to Denver, which he did. Yikes!

To make matters worse, Ladd said he was getting some death wobble on the highway on the way back to town. The next morning, the bracket holding his drag link to his Jeep's frame snapped in two. He would get it welded so he could make it home but he was out for the rest of the trip.

Who knew that Bull Canyon could cause so much destruction?! 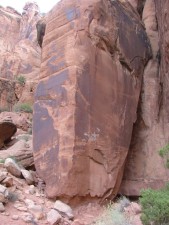 Led by Monica I.
We were in Bull Canyon with some daylight, then we played in the sand as the sun went down. After Metal Masher and Gemini Bridges it was a long day but a fun one. We all left a little bit sandier than we were when we went in. We hurried…
Join Us!
If you aren’t a Member or Subscriber, you can’t see all of the content on this site. Get membership information to see why this site is best when you join and log in