Our day hadn't been going as planned and it would continue to be weird all the way to the end. We wanted to go see Montgomery Pass and Bockman Road before heading back in so we skipped taking the easy road north and turned off at Bockman Road.

We first headed for Diamond Peaks to do a loop with Bockman Road. But it turns out that Diamond Peaks is now an ATV trail. We also discovered that Bockman Road went all the way to the pavement so we changed our plans around a bit. It was lunchtime so we headed for the Bockman Campground.

The place was almost empty. Everyone had packed up and gone home because it was Sunday. We found a pull-through spot with a big picnic table where we could all have lunch. The weather was nice but the mosquitoes were vicious so we didn't hang out as long as we usually like to. We'd all had our share of mosquito bites already.

After lunch we headed for Montgomery Pass. We got up to where the Yurt parking was and the trail was closed. Everyone was getting pretty annoyed because there were no warnings or notices. It would have been good to be able to read a sign at the entrance station noting the closures so we could have planned our day better. Even a sign at the trailhead would have been good. We'll just have to do Montgomery Pass a different day.

We'd all had about enough so we decided to head down Bockman Road and get home at a decent hour for a change. The trail was pretty mellow and we hoped that it would be open the entire way. It started sprinkling and we stopped at a wide spot to put in windows and doors.

It was a good thing we stopped. Mere minutes after heading out again it started really raining. And then it started hailing. Muddy water was streaming down the trail as we climbed.

Once we got over the ridge and started heading downhill the weather cleared up a bit but it still rained all the way out. There were some slick spots but no one got into any trouble.

Once we got to the trailhead we found two employees of the State Forest State Park on a UTV. We talked with them a bit and they were very friendly and helpful. After a short chat we headed across the highway to air up.

It was the middle of the afternoon so we just headed for home. We didn't even stop to do Kelly Flats (though we talked about it). It was a long and mosquito-filled weekend and we were all looking forward to getting back home. We'll need to come back again to do the trails we missed, so we'll be back. 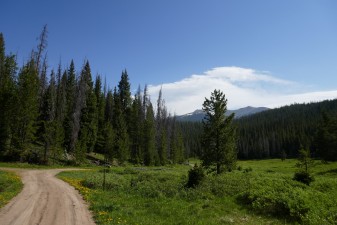 Led by Monica I.
It was time we got back to the lush trails in State Forest State Park.  This time, we were camping at the Ranger Lakes Campground and it was amazing.  Mike and Monica showed up the night before in their motor homes, and Niko showed up in the morning.  Monica was…
Join Us!
If you aren’t a Member or Subscriber, you can’t see all of the content on this site. Get membership information to see why this site is best when you join and log in