It was time we got back to the lush trails in State Forest State Park.  This time, we were camping at the Ranger Lakes Campground and it was amazing.  Mike and Monica showed up the night before in their motor homes, and Niko showed up in the morning.  Monica was riding shotgun with Mike for this trip.

We drove the very short distance over to Bockman Road and immediately remembered coming down it in the other direction in the pouring rain.  We had nice weather for this trip, though.  We aired down at the trailhead in the tiny area there, and then headed up the hill.

It started as a nice drive through the trees, bumpy in spots but not difficult.  For the first time, we saw a porcupine run across the trail in front of us.  We caught a couple pictures as he ran into the trees.  Cool!

Everything was so green, with marshy areas here and there between large areas with crowded trees.  There was also evidence of a lot of beetle kill, a lot of the dead trees standing next to healthy ones.  We were happy for recent rains.

When we got to Montgomery Pass, we were excited to finally add the new trail.  The last time we were there, we only got a short distance before the trail was closed at a weird sign in the middle of it.  Like déjà vu, we came around a corner to see the same sign!  It was three logs in a teepee with an "authorized vehicles only" sign on it.  The signs at the trailhead didn't indicate it was closed, but we couldn't keep going.  Later, we asked about it at the visitor center and they said the forest service was likely working on the trail.  It was very frustrating, but we'd have to try a third time some other day.

We went back to Bockman Road, and it wasn't long before we were passing the campground.  We all decided that Ranger Lakes was better, even though the views at this campground were pretty impressive.

After we got to County Road 41 we turned right to head over to check out Ruby Jewel. 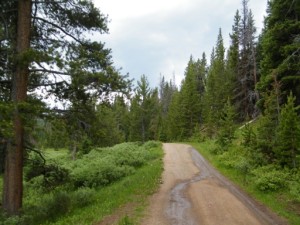 Led by Monica I.
Our day hadn’t been going as planned and it would continue to be weird all the way to the end. We wanted to go see Montgomery Pass and Bockman Road before heading back in so we skipped taking the easy road north and turned off at Bockman Road. We first…
Join Us!
If you aren’t a Member or Subscriber, you can’t see all of the content on this site. Get membership information to see why this site is best when you join and log in