We had just come off of Green Ridge and we'd use Bald Mountain to cut over to County Road 69 just north of Sevenmile Creek. It was a new trail for us and we weren't sure what to expect. Luckily, it followed forest service road 517 the entire way.

We ran it from the west end to the east end and found ourselves going downhill nearly the entire time. It would have definitely been more fun and more challenging if we had run it in the other direction, and we were soon talking about doing the "Mud Loop" again next year.

Just past this intersection was the top of the Rock Hill. It even had a couple of challenging sections on the way down. One chunky spot was steep enough to get a spotter request from Bill, and everyone got pretty twisted up. It was a blast, but it would be so much better going uphill.

Once we got to the east end of the Rock Hill things mellowed out a bit. It was still bumpy and muddy in spots, but not too bad. We stayed on 517 at each intersection and worked our way out. We even had a couple of spots where the aspen trees had left their yellow leaves all over the trail, which was nice.

When we got to the east end of the trail, it was nearly dark. We decided to save Sevenmile Creek for another day, and we aired up in the fading light. It was dark when we were finally working our way down County Road 69.

We stopped for dinner at the Mishawaka Inn on the Poudre, and dinner was good. Naturally, we had to eat inside because of the chilly temperatures but it was still nice. After that, we all headed for home.

We're already looking forward to the Mud Loop run in a future season. This trail was really fun! 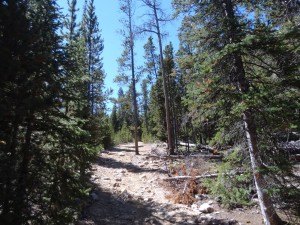 Led by Monica I.
Bald Mountain is a fun trail, but you have to do other roads and trails to get to it so we don’t get to see it as often as we’d like. We came off of Sevenmile Creek to do the second trail in the Mud Loop, convinced we wouldn’t see…
Join Us!
If you aren’t a Member or Subscriber, you can’t see all of the content on this site. Get membership information to see why this site is best when you join and log in