Bald Mountain is a fun trail, but you have to do other roads and trails to get to it so we don't get to see it as often as we'd like. We came off of Sevenmile Creek to do the second trail in the Mud Loop, convinced we wouldn't see much mud. We knew the rocks hadn't gone anywhere, though, so we were looking forward to this leg of the loop. We found the trailhead easily on Manhattan Road and headed in.

There were people getting firewood at every possible wide spot in the trail. It was good they were thinning out trees in spots, but in other spots it was pretty ugly. The chainsaws made it pretty loud, too.

We were following the main forest service road, and it had us turn off of the main road and into tight trees. We knew right away that there wouldn't be any big trucks and chainsaws where we were going. The trees were tight and turns were close. It almost seemed like an ATV trail, and we decided pretty soon after starting the spur that we'd go back to the main road instead. We got turned around and back to where we turned off and headed in.

The main, easy road paralleled our old and intended track, and soon it joined up with it again. It would be a good diversion for 4x4s smaller than our Jeeps and Toyotas, but it wasn't for us. The trail got only mildly bumpier and it looked like the firewood cutting was behind us. We found a wide spot and parked for a nice lunch with big scenery. We all knew it wasn't long before the snow was here, so we took an extra-long time just soaking up the sunshine.

Soon after lunch we found the beginnings of the Rock Hill. It's a long, uphill climb over rocks that are sometimes small but often bigger and loose in spots. It's a gift that keeps on giving, and we really had a blast. We worked on the obstacles on our own, for the most part, and it was a great time.

It was a bummer when the Rock Hill ended, even though it's a really long rock garden. The trail mellowed out, and then we finally made it to the saddle between the different peaks of Bald Mountain. It was the only truly open spot we'd seen in a while, but we didn't hang out. It was already getting chilly at elevation.

Then we were headed downhill, a bumpy ride at first that soon mellowed out. We saw a bunch of people taking a lunch break from dirtbikes and ATVs, and we passed a lot of spurs. We saw a big, flat campsite in the trees next to the creek so we stopped there to enjoy it. It was a really nice break, and we hated to leave. It was a great campsite, though it was a bit in the middle of things.

Not long after our break we came to the meadow where Green Ridge starts. We saw more people on dirtbikes there, but then we left them as we turned down the last trail. We didn't see any mud worth mentioning on Bald Mountain, but we knew if we were going to find mud it would be on Green Ridge. Let the fun begin! 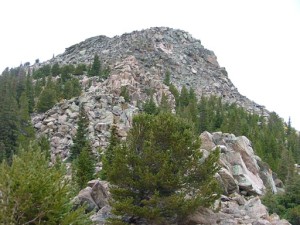 Led by Mike S.
We had just come off of Green Ridge and we’d use Bald Mountain to cut over to County Road 69 just north of Sevenmile Creek. It was a new trail for us and we weren’t sure what to expect. Luckily, it followed forest service road 517 the entire way. We…
Join Us!
If you aren’t a Member or Subscriber, you can’t see all of the content on this site. Get membership information to see why this site is best when you join and log in