We had been anxious to get back to Badger Creek since we first saw the trail in October 2006. When we got to the creek we saw that the trail was broken in half, and we could see the rest of the trail on the other side. This time, we would start on the other end and run the other half. We were also hopeful of finding the Left Fender obstacle we had heard about. We did not know if the creek would be passable this time, but we were prepared to turn around and backtrack if needed.

We met in Castle Rock with the other TrailDamage.com group that was running the Liberty Trail on the same day. It was good to see everyone and we all must have been ready for a trail run because everyone was on time and we hit the road shortly after 8AM. We had a caravan of eight vehicles as we drove to Penrose together.

At Penrose, the Liberty group of three split off and the rest of us continued on to Badger Creek with five vehicles. Since we would be so close to Royal Gorge, we decided to take a small detour to see the bridge.

If you suffer from vertigo or fear of heights, this view isn't for you. The bridge over the Royal Gorge is billed as the world's highest suspension bridge with its deck at 1,053 feet above the Arkansas River. The bridge was built as a tourist attraction in 1929. We were lucky to be there on a slow day, as we drove across it two times in each direction, stopping often for pictures.

After our side trip, it was still a long way to the trailhead so we hit the highway and made good time from there to Howard and the other end of the Badger Creek trail. You have to look closely to see the turnoff onto County Road 4 -- it's just past a closed gas station on the right. Cross the bridge over the Arkansas River, turn right after the railroad tracks and you'll find the trail end on your left. The road is identified as Sand Gulch on a sign at the trailhead.

There's a lot of room to pull off at this end of the trail. After airing down and disconnecting we quickly got going. Route finding was easy and the road was well maintained. Much of the early trail was through private property. We met no traffic except two pairs of ATVs.

After heading generally north, we turned west under some power lines. Just before dropping down to Badger Creek, we explored a side spur up to an abandoned copper mine. This trail was less traveled but there were some fresh tracks ahead of us. We had hoped that this spur would have the Left Fender obstacle on it but it wasn't to be. We soon came to the mine and the end of the spur. It was a good place to stop and explore for a bit and to eat a late lunch. The mineshaft is located just above the parking area and it's still open.

After our lunch we retraced our tracks back to the main trail. After dropping down to the creek we recognized the trail where we had walked for a distance in October. We came to the portion of the trail where it goes in and out of the creek a few times and were soon at the main crossing. We were relieved to find that the trail had been re-established up the gravel bank that had been washed out in the fall. Even though we were relieved, it was also disappointing to realize that there were no real obstacles on the entire trail. In fact, Roger drove the trail completely in 2-wheel drive.

We continued across the creek and we finished the trail out to Highway 50. Since it was still early afternoon and we were so close, we decided to cross the highway and scope out Minesweeper. We couldn't drive that far and be so close without checking it out. 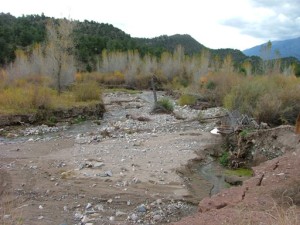 Led by Monica I.
We had really been looking forward to this trip. We were going to find and explore two new trails with very little information to guide us. The first trail was called "Left Fender" and we had read a bit about the obstacle and how it is difficult to do without…
Join Us!
If you aren’t a Member or Subscriber, you can’t see all of the content on this site. Get membership information to see why this site is best when you join and log in