We had really been looking forward to this trip. We were going to find and explore two new trails with very little information to guide us. The first trail was called "Left Fender" and we had read a bit about the obstacle and how it is difficult to do without messing up your left fender. We were ready to check it out.

We found the trailhead easily enough, and there were a few people on dirtbikes at the trailhead when we got there. They said that we had found the right trail and that we probably couldn't get any further than the creek just a few miles in. We were hoping to prove them wrong, so we started up.

The trail was really mellow. Actually, the hardest part was the bumpy dirt road on the way to the trailhead, and even that wasn't difficult. The scenery would have been better but there were almost constantly powerlines above us.

The trail went up big hills and then down them, and finally we got to the creek below us. The trail curved around and we saw where it continued. We got out to check it out.

The trail was basically gone. The creek had washed it away. The trail ended at a five-foot drop into the shallow creek. The edges were very loose. If it was solid dirt it might be something we could climb up and down, but this wasn't going to work out.

We had lunch and talked about it, but there really weren't any options. It was obvious why there was such a well-defined loop here in the trail. It had been this way awhile.

We saw an illegal trail through the brush, but otherwise it looked like people were behaving themselves. We walked down and across the creek, then explored the other side. A sign for Badger Creek was just over the other side, and we found a well-used trail over there. It looked like you could get here from the other side.

We'll go explore it soon and figure out how to get to the other half. That's where the Left Fender obstacle is. We'll have to save it for later. 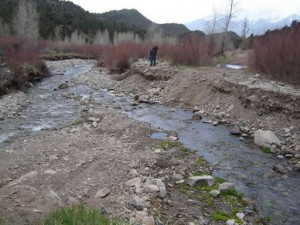 Led by Mike S.
We had been anxious to get back to Badger Creek since we first saw the trail in October 2006. When we got to the creek we saw that the trail was broken in half, and we could see the rest of the trail on the other side. This time, we…
Join Us!
If you aren’t a Member or Subscriber, you can’t see all of the content on this site. Get membership information to see why this site is best when you join and log in