Trail Run on May 15, 2018
Report and photos by Monica I., Trail Leader
View trail information for Asphalt Ridge

This trail is crazy!  We had no idea that it was going to be such a blast, and it was probably the highlight of the trip.  It had been a pretty mellow vacation so far, and the day started out with a weird wandering through Fantasy Canyon.  It was already mid-morning by the time we got to the trailhead and aired down.

Our trail kept splitting and rejoining, and at one point we wandered away from the main trail on a side trail and it just ended.  It had a small amount of shade from the hot sun and it was noon, so that was lunch.  It wasn't the best spot, with no scenery and animal bones around, but it did the trick.

We followed it as it took us higher, and then all of a sudden we were on the ridge.  The valley was gorgeous, and the whole town was laid out before us.  Nice!  If it would have been just a fun trip along a ridge that probably would have been enough, but we didn't end up calling it "Rollercoaster Ridge" for nothing.

The hills kept getting steeper and higher in elevation.  Down one, up another, and then down again.  We had to keep getting out at the tops of them to make sure we didn't drive right off the edge.

We passed the high point, each of us in turn, because there was never enough room at the top for more than one vehicle.  Then we were looking down at The Pit.

The trip up and out of The Pit was just as crazy.  We took our turns coming up it at a good clip and then almost losing momentum near the top.  It's pretty long, and pretty steep.  But then Roger drove up it with his Supercharger, cruising right along at speed without a care in the world.  Too cool.

After that, we worked our way off of the trail.  We went over to the big parking area in the middle of McCoy Flat to discuss the rest of the day.  It was hot, and the picnic tables were cool in the shade.  We had planned the vacation when we did so we could be at Split Mountain when there was no moon, because that area is one of the darkest places in the United States without much light pollution.  So, even though we could still do another trail in the area we decided to call it a day and head back to camp for a relaxing dinner.

Monica's on-board air failed, like it does every other year, and then she got a mouse in her motor home (free trip to Colorado!).  But the night stars were amazing.  We sat outside watching satellites go by, checking out the moons around Jupiter.  It was one of the coolest ends to a wheeling day we'd ever had. 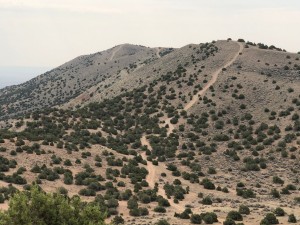 Led by Matt K.
Asphalt Ridge was the best trail that Matt would run in the Vernal area. This trail was crazy with all the up and downs like a roller coaster. At the start it was easy going, but as Matt made his way down Asphalt Ridge the trail gained elevation and wound…
Join Us!
If you aren’t a Member or Subscriber, you can’t see all of the content on this site. Get membership information to see why this site is best when you join and log in