Asphalt Ridge was the best trail that Matt would run in the Vernal area. This trail was crazy with all the up and downs like a roller coaster.

At the start it was easy going, but as Matt made his way down Asphalt Ridge the trail gained elevation and wound its way, curve by curve, from the eastern starting point towards the northern cliff edge. You can see that cliff edge as you approach the area from the north. Of course, from up there, Matt had awesome views of the area north of the mountain and city of Vernal, though it was a bit smoky from the forest fires to the east and southeast.

Matt ran into one person on a side-by-side that had a few dogs in the back in custom little dog boxes. It looked pretty cool.

Matt really did like driving up and down the steep hills. At the top of the hills, it was at times hard to see which way the trail would continue down the hill because the hood of the Jeep would just point towards the sky. Then you came over the crest and suddenly faced a steep decline, and you started driving down, hopefully still on the trail!

After all the fun of going up and down the trail, it eventually started winding down and going down into a parking lot. Then we headed off to Moonshine Arch. 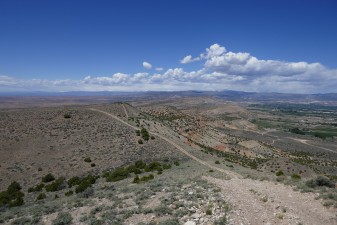 Led by Monica I.
This trail is crazy!  We had no idea that it was going to be such a blast, and it was probably the highlight of the trip.  It had been a pretty mellow vacation so far, and the day started out with a weird wandering through Fantasy Canyon.  It was already…
Join Us!
If you aren’t a Member or Subscriber, you can’t see all of the content on this site. Get membership information to see why this site is best when you join and log in