Three members left the meeting location at 8:45AM -- Mark, Jim, Mike and his nephew Andrew visiting from Maine. A large pickup truck towing a huge trailer was behind us so we decided not to explore the lower portion of Leavenworth Creek for a possible link with Paines Mountain.

At Waldorf we decided to do the Argentine Pass trail first. Only one tight switchback with a rocky ascent make the trail anything but easy. From the pass we had gorgeous views of the surrounding mountain ranges under a blue sky with puffy white clouds. To the west we were looking down into the Horseshoe Basin and the upper Peru Creek valley.

After returning to the Waldorf site, we went up the steep hillside from the mine dump. On the top, we all agreed it was not that difficult. We proceeded to the Santiago Mine site for lunch. The sky was now becoming filled with gray clouds. Since we had all been to the top of McClellan Mountain before, we decided to descend and take a portion of the upper Leavenworth Creek trail to a trail going to Paines Mountain on the east side of the valley.

While crossing Leavenworth Creek, mother nature decided to wash some of the trail dust from our vehicles. After the creek crossing and ascending some switchbacks, Paines Mountain has two main trails, one going south and one north. Both are easy shelf roads on the west side on Paines Mountain in a forest of tall pines. Views across the valley to the exposed shelf roads to Argentine Pass and on McClellan Mountain are limited to a few open areas.

We took the southern section first. The short spur trails are marked with Forest Service post signs. At the second switchback from the top, we were disappointed to find numerous mounds of earth across the road because the top was shown to be above timberline and probably offers some good views. We found a downed FS sign marking the road as closed. While we walked up the road, Mike replanted the sign and add some downed branches to the mounds.

We backtracked down to the junction with the trail going north. This trail is longer and is a little more open. Thousands of small pine trees are starting to grow along the uphill side of the trail in some sections. The further north the trail goes the more unused it becomes. After a few descending switchbacks, the trail becomes too narrow to proceed. This was before Mike's GPS using USGS data showed the trail ending -- forest service data shows the trail continuing to the trail along Leavenworth Creek.

Although we did not explore for the lower end of this trail, we agreed it could not be used as a loop for vehicles. Jim lead us in reverse and upslope to the nearest switchback were we could get one vehicle at a time headed back. We returned to the main Waldorf trail and called it a day.

All agreed it was a very good trip -- it meet our criteria of no vehicle problems and no encounters with hard objects in the environment. 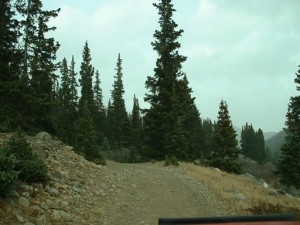