We accidentally stumbled onto Area BFE as we came off of Strike Ravine. We had seen nice, metal signs for Helldorado, Suicidal Tendencies and Green Day, but we didn't realize they were Area BFE signs. Bob found an information area, and that's when we knew where we were.

Helldorado was insane -- we walked a little bit of it. Suicidal Tendencies went straight up a hill so steep it didn't seem possible.

We played around a little bit in the playground near the parking area. There were obstacles all around that were extremely difficult, but we managed to get through some of the hairier ones that we could manage in our Jeeps.

There was one line we took repeatedly that involved a very steep drop down into a small ravine. One trail snaked off in one direction, but we followed the other direction around a large rock and up to a large chunk of slickrock. It was a blast to drive up. Eric even backed down it.

Mike didn't want to leave, playing on ledges on our way out. Everyone had a blast in the small amount of time we spent there. We'll definitely plan an entire day there during a future Moab trip -- this place is a great time! 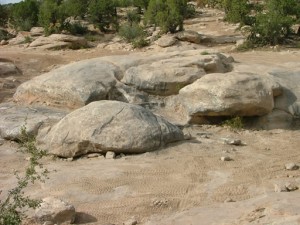 Led by Monica I.
We ran Minor Threat and Green Day, and we actually had enough time to go play in Area BFE for awhile. Bob had been missing all day while the shop fixed his Jeep, but then he showed up right while we were finishing up our playing, so he got to…
Join Us!
If you aren’t a Member or Subscriber, you can’t see all of the content on this site. Get membership information to see why this site is best when you join and log in