Trail Run on May 18, 2007
Report and photos by Monica I., Trail Leader
View trail information for Area BFE

We ran Minor Threat and Green Day, and we actually had enough time to go play in Area BFE for awhile. Bob had been missing all day while the shop fixed his Jeep, but then he showed up right while we were finishing up our playing, so he got to play, too.

Some of our Area BFE play time was in the morning, before we even got started. There is a nice section of rocks near the start of Helldorado and Minor Threat, and almost everyone got some flex time.

After our trails, we all played in various areas, going up rocky obstacles and down steep areas of slickrock. At one point, Robert got in some big rocks near the middle and really got in a bad way. He did some trail damage all along the passenger side of his vehicle.

We were about done and Don and Michael were putting their tops up thinking it might rain. Then Bob came roaring around the corner, ready to play. The shop fixed the axle shaft issues he got from the Pickle, but it looked like his rear locker wasn't working. It worked only some of the time, and it seemed to be pretty unpredictable. Still, he managed to do just fine on the obstacles.

We played a bit more, then headed for home. It's always a good time in this 4x4 park, and we were glad we had the time to play. 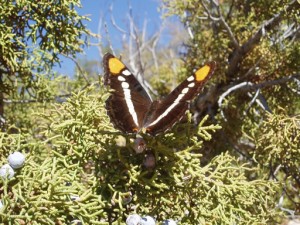 Led by Monica I.
We accidentally stumbled onto Area BFE as we came off of Strike Ravine. We had seen nice, metal signs for Helldorado, Suicidal Tendencies and Green Day, but we didn’t realize they were Area BFE signs. Bob found an information area, and that’s when we knew where we were. Helldorado was…
Join Us!
If you aren’t a Member or Subscriber, you can’t see all of the content on this site. Get membership information to see why this site is best when you join and log in