We'd been talking about a big trip to White Rim for years, and this year was all about the multi-day trips. We gassed up at the Shell station north of Moab and then headed straight for the Canyonlands Visitor Center in the Island in the Sky district to pick up our permits. Everything went well, and we started the trail at 4:30PM. We planned on camping at the Airport Campground and Potato Bottom Campground, making a three-day trip out of it. It wouldn't be enough time to do any of the longer hikes, but we'd have time to see everything else.

Most of us had been on the Shafer Switchbacks before, and we really enjoyed them. It was good to see them fixed up after they collapsed. We saw one vehicle pulled to the side, and they pointed out what was probably dinosaur bones in the rock next to the road. Cool!

Our first stop was at the Gooseneck Overlook where we parked and walked out to the edge. It was still pretty hot out, and the hike was short. We hung out at the overlook for a while, enjoying the scenery around us. We wouldn't see much of the river after this first evening, so we took it all in.

The Colorado River Overlook ended up being one of our favorites. We parked the vehicles in a big line near the edge for photo opportunities, and everyone was in a fantastic mood. The views were incredible.

Musselman Arch was a nice walk, and we got there as another vehicle was leaving. We'd end up camping with them that night but we wouldn't see them again after the sun went down. The arch was cool, and most of the group walked on it. If you're afraid of heights you might want to avoid it.

It was really cool having those three stops all in a row, but after that the trail was mellow as it followed the buttes to the west of the trail. It was gorgeous as the sun started to set. We passed Lathrop Canyon, planning to do that trail first thing in the morning.

Airport Campground has sites A and B near the first pit toilet, and sites C and D near the second pit toilet. You can see the other group from where you are, but it's too far to yell. We had A, B, and C reserved so we had to split up. Even with all of our tents we were pretty far from each other. We hung out and had dinner as the sun went down, but no one stayed up very late. We had a big day planned, so we all headed off to our tents soon enough.

In the morning, we all hurried to pack up before the sun came over the butte next to us. It turned out to be a good idea to be in sites A and B and as close to the butte to the northeast as possible. That butte provided the most shade. As soon as the sun was up it got hot out, and it stayed toasty all day. We regrouped and headed back a little way to do Lathrop Canyon. That trail ended up being a great time.

After Lathrop Canyon we continued along White Rim. It was a long stretch before the next campground at Gooseberry. Still, even without many stops it was a nice drive along an easy road.

We stopped at the pit toilet at Gooseberry Campground, starting a trend where we'd stop at all of the pit toilets along the way. There were a lot of them! The campground was very exposed and a little desolate, so we were happy we stayed at Airport.

We cruised along and stopped for a bit at the north end of Monument Basin. There was a deep and sharp cut into the basin and the views were really nice. It was a good break.

There was a bit of a hill climb after Monument Basin, and then we were at the intersection for White Crack. We wanted to see everything, so we followed the spur to its end. It was noon and the campground was empty, so we stopped for lunch. There wasn't much shade, so we improvised with strategically placed vehicles. The campground was nice because it was far from the main trail.

After lunch we headed up the second half of White Rim around Junction Butte. It was fairly uneventful though the scenery was inspiring. We got to the base of a steep hill and we were treated with the fun of climbing up to the top of the Murphy Hogback. We each took turns climbing to the top and everyone enjoyed the fun.

At the Murphy Hogback Campground we took a long break. There is a wide rock at the top that has a bit of an overhang, providing the wonderful shade that only Utah provides. The scenery was amazing, and this would be a fantastic campground. We stayed for a long time, relaxing and enjoying the big views. Jeffrey found a skull near a rock that had been bedazzled, and we all agreed it was pretty creepy to find it there. Still, the site was really, really nice.

The descent down the other side of the Hogback was fun, too. Then the trail twisted and turned its way around the rim of Soda Springs Basin. When the trail turned west the views were amazing, and we were constantly snapping pictures of Turks Head and the rock formations in the canyon. Even the buttes far to the west were beautiful.

Candlestick Tower was almost as cool as Airport Tower, but Candlestick Campground was a bit desolate. It was near the water, though, so the temperatures were decent. We only stopped there for a short time.

We went around a narrow but deep canyon near Holeman Spring Basin and then we had big scenery as we followed the Green River but high above it. We caught a few glimpses of water here and there, but we didn't really see much of it until we got close to Potato Bottom Campground. We found ourselves suddenly surrounded by brush and around big cottonwood trees. This was our second stop for the night and we split up between sites. There was plenty of room and we hoped for cooler temperatures near the water. It was overcast, though, and the clouds stayed heavy over us all night. That meant it didn't cool off much. It was 77 degrees when we woke up, the coolest it had been the entire trip.

Julie, Les, and Katie wanted to do the hike to the Fort Bottom Ruin so they went ahead of the group to get an earlier start. Jeffrey needed to do a road trip to New Mexico so they left soon after. The rest of us had a lazy morning before heading up Hardscrabble Hill to meet everyone else at the hike parking.

Hardscrabble Hill was supposed to be the big obstacle, but we thought the Murphy Hogback was more challenging to climb. Still, Hardscrabble Hill was longer and often at the edge of a cliff high above the river. It was scenic and fun. We got to the parking area and waited for the hikers to return. The first group hiked to the ruin and it was cool, but they didn't go all the way down to the outlaw cabin. That meant they were back fairly quickly. While we were parked, a park ranger came by on a dirt bike to check our permits. What an awesome job!

When we were all back (minus Jeffrey) we headed down the hill. We could see a truck parked at the Hardscrabble Campground from our perch high above them on the hill, and they were still there when we got to the bottom. Monica wanted to map the road to the camp so she turned in while the others waited at the intersection. Some people on bicycles were headed out, and then the truck was headed out behind them. They went up the hill and we headed in the other direction.

It was a pretty short trip to Taylor Canyon where we did that trail before coming back. It was a nice trail but not nearly as cool as Lathrop Canyon. Once we were back we checked out Labyrinth Campground and decided it was the best one based on the views and the close proximity to the water without being too close. It's really the perfect site.

The trail to the end from Labyrinth is gorgeous as it gets very close to the water. When we got to the park boundary we met another vehicle coming in, but passing was easy. We went around Horsethief Point and then we were out on the easy trail of Mineral Bottom.

We'd all been waiting for years to do White Rim and we were grinning from ear to ear now that we'd seen it. It was a blast, and we hoped it wouldn't be the last time we'd see the trail. 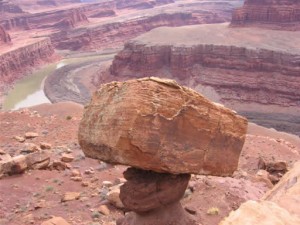 Led by Ladd G.
White Rim is a long trail, and we planned on taking three days to do it. We had camping permits for two nights. We planned to take our time and do side trails and some hiking along the way. We had spent the night in Moab, and left town early…
Join Us!
If you aren’t a Member or Subscriber, you can’t see all of the content on this site. Get membership information to see why this site is best when you join and log in