White Rim is a long trail, and we planned on taking three days to do it. We had camping permits for two nights. We planned to take our time and do side trails and some hiking along the way. We had spent the night in Moab, and left town early from City Market. It is a bit of a drive to Canyonlands National Park. We stopped at the visitor center to pick up our camping permits. We started at the east end of the trail.

The trail is smooth and with great views as it descends from Island In The Sky to the area below via the Shafer Switchbacks. The trail is a series of switchbacks with plenty of room for most vehicles to make it through with no problem. Sections are fairly narrow and there is room for just one vehicle. There are generally places for vehicles to pass, and at the visitor center we were told to watch for oncoming vehicles before starting down.

Bob led through the switchbacks. We stopped a few times for Ladd to take pictures and to enjoy the view. We saw one vehicle heading up the trail -- a bright yellow and very clean Hummer H2.

The switchbacks were no problem, although anyone with a fear of heights or shelf roads may feel uncomfortable. Views were spectacular.

At the bottom of the switchbacks was a straight section of road with a nice latrine at the fork in the road that leads to the Schafer Trail or the White Rim trail. We were told to use latrines where possible, but that "cat holes" were allowed.

At the fork we headed to the right entering the White Rim trail. Shortly after the intersection we came to Gooseneck Hiking Trail. It was about 11:00AM and we decided to take the short walk out to the Gooseneck Overlook. This short hiking trail is well marked with a sign and rock cairns. The views of the river were great and you can see the Gooseneck in the Colorado River.

Returning to White Rim, we continued down the trail to Mussleman Arch. This is right off the trail and you get a spectacular view of the arch. From the side the arch looks thin and narrow, but walking out to the arch you see that it is wide enough to walk out on without feeling you are going to fall off. We had two other vehicles stop the same time we were there, and left before they did, we did not see them again. From Mussleman Arch we continued to the cutoff for Lathrop Canyon. We ran Lathrop Canyon (see a separate report on this trail) and then continued on with White Rim.

We continued to a section of White Rim with large arches and towers. Airport Tower was massive and the campsite at Airport was the first we saw along the trail. It was a desolate-looking site, and one we would not particularly recommend. We passed Airport Tower around 2:30PM. One of the arches was named Washer Woman, and the silhouette of the arch looked just like its name. The canyon and arches view between Airport and Gooseberry were very scenic and we stopped along the way for pictures and to see the odd shapes in the canyon rim.

We arrived at our Gooseberry campsite at 4:15PM. We had logged a total of 67.8 miles from our start at City Market in Moab. Gooseberry had two campsites. The other site had a couple of vehicles with cyclists. Like all of the campsites, ours was very large. Each site had stakes marking the boundaries and you can set up anywhere within the boundary. With just two small tents we found a nice flat spot, but there was no shelter from the wind, which was fine for the evening. It was overcast but not too windy until the next morning. We had a nice dinner of filet mignon, twice cooked potatoes and salad. We spent the early evening drinking wine, and gabbing.

Day two on White Rim started with off and on clouds and strong gusts of wind as we packed up camp after a breakfast of western omelets. It was a bit difficult getting the tents down in the wind. After the early sun, it became overcast and we had off and on light rain. It kept the dust down!

From Gooseberry we went down the trail to White Crack. This was our first choice for campsites, but it is the most requested campsite in the entire National Park system, and difficult to get. We wanted to see the site and the views. The short spur to White Crack is just 1.4 miles. When we got to White Crack the weather turned wet and misty, we saw a bunch of tents with bikes, the campers we still in the tents out of the rain. It was a beautiful site, and on a nice day the view would be truly exceptional.

Leaving White Crack, we returned to White Rim and headed towards Murphy Hogback. We expected the trail would be a little more fun around the Hogback since the Park Ranger had told us it was steep and narrow and to watch out for oncoming traffic through this section. The weather continued to be off and on overcast and then bright with a bit of misty rain. It was not too cold.

The section of trail onto the Murphy Hogback was steep and narrow, but not particularly difficult. Stock 4x4 vehicles could do this section, but it was a bit tricky in places. We made it to the top of the Hogback at 11:00AM and checked out the view and campsites. This would be a nice place to camp. There are three sites, and site A or C would be the best. The trail down the Hogback was as tricky as the trail up and was fun to drive.

From the Murphy Hogback we continued towards Candlestick Tower. The weather cleared up and we had bright blue sunny skies, and we were looking forward to the change. It looked to be a good night for camping out. We enjoyed the sunny views and stopped for pictures. We found some weird "dead alien" plants, and Ladd had fun taking pictures of the plants. Candlestick Tower was on the right side of the trail, and well-named. We passed Candlestick campsite at 12:45PM, and Ladd's odometer read 95.8 miles from City Market. Candlestick was the most desolate of the campsites we saw and would be our last choice out of all of the campsites on White Rim.

Passing Candlestick, we looked for a lunch spot and found one at an overlook at the Green River. There was another group eating there, about eight bikes and a long wheelbased Jeep Rubicon as a support vehicle. As we were finishing lunch the sky behind us started to darken, and the bikes took off down the road in the same direction we were heading, just as they left we felt wind and rain, and packed up quickly.

As we ran down the trail the wind and rain picked up considerably, and changed over to sleet and light hail, thunder and lightning. We were glad to be in Jeeps and not on bikes. We continued through the rain, descending to Potato Bottom which was our campsite for the night. It is alongside the river and the descent is gradual. The group of bikers had abandoned their bikes and were crowded into the pit toilet to get out of the hail and rain -- it looked like a tight fit!

The rain eased off at Potato Bottom and we checked out our campsite. There were three separate sites. Ours looked pretty good but wet because of the rain, which began to pick up again. Since it was early, only 1:35PM, we elected to continue on and see what was ahead. We thought we would come back to the campsite, or keep on going since the weather did not look very good for camping. Potato Bottom was 106.5 miles from City Market by Ladd's odometer.

We had planned on taking the hike at Fort Bottom, which is just outside Potato Bottom, so we drove there to check it out. Before getting to the trail head we climbed Hard Scrabble Hill, and it was foggy and wet from the rain. It was a pretty climb, and would have been prettier in the sun, but the mist made it a bit eerie. This section was steep up and down. There was an interesting spire along the way.

We passed Fort Bottom, and because of the weather, we saw we could not do the hike. The trail would have been wet and messy. We elected to continue on, and decided to go to the Taylor Canyon trail. We figured we would decide whether to come back and camp at Potato Bottom or continue into Moab after running Taylor Canyon.

After returning from Taylor Canyon, we elected to head back to Moab, the weather looked like it might be improving, but it was muddy. We figured if we got to Moab that night we could do some other runs the next day. We went to the end of White Rim, and headed up Mineral Bottom trail. 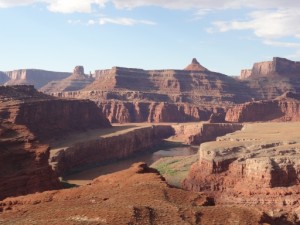 Led by Monica I.
We’d been talking about a big trip to White Rim for years, and this year was all about the multi-day trips. We gassed up at the Shell station north of Moab and then headed straight for the Canyonlands Visitor Center in the Island in the Sky district to pick up…
Join Us!
If you aren’t a Member or Subscriber, you can’t see all of the content on this site. Get membership information to see why this site is best when you join and log in