We ran the White Owl Lake trail in two halves. We were trying to see all of the major trails in the area, and that's just how it worked out. It ended up being a nice trail, and it would be a great addition to Coffee Pot Road if you were in a passenger car or stock vehicle.

It wasn't long at all before we got to White Owl Lake. The views of the lake as we approached it from above were spectacular. When we got to the lake and the campground, we were surprised to see pit toilets and a fairly developed camping area. It would be a good place to camp in the future.

We didn't stay for long. We headed back out to Coffee Pot Road, and then we did Adams Lake. After that, we did Transfer Trail down to the end of White Owl Lake where we did the southern section of the trail.

The southern section was nice because we got to see Grizzly Lake (you can't see it from the Grizzly Jeep Trail) and Duck Lake. Both lakes were very nice.

We also saw a lot of sheep on the southern half, which was cool. They get out of the trail a little bit better than cows do. Cows always seem frazzled and confused, but the sheep got it together pretty well.

This ended up being a nice, mellow trail in the middle of a bunch of bumpy trails that filled our long day in the area. We were happy we got to see it, and it would be a good one to visit again. 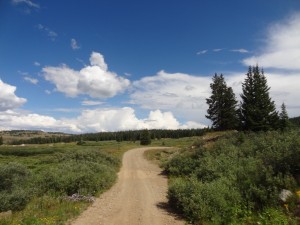 Led by Monica I.
We left our campground and hoped to see Julie before we turned onto White Owl Lake, but we weren’t so lucky. It turned out that she was a couple hours behind us. We started the trail and everyone was all smiles. We stopped at the campground to check it out….
Join Us!
If you aren’t a Member or Subscriber, you can’t see all of the content on this site. Get membership information to see why this site is best when you join and log in