We left our campground and hoped to see Julie before we turned onto White Owl Lake, but we weren't so lucky. It turned out that she was a couple hours behind us. We started the trail and everyone was all smiles.

We stopped at the campground to check it out. It was a lot different than the Supply Basin Campground where we were staying. It had true camping spots with numbers, picnic tables, and fire rings. There was even a pit toilet. Of course, Supply Basin was free and White Owl was not -- though it was really cheap. The lake was pretty, but we agreed that we liked our campground better.

The trail was pretty mellow and we didn't see anyone. There were blue skies and large patches of flowers next to blue, shining lakes. It wasn't long before we had passed the intersection with Grizzly Jeep Trail. We planned on going to the end of White Owl and heading back in to do that other trail.

Near the end at Transfer Trail, we checked out a spur. It was little-used, but not difficult. The odd thing was that there were man-made hills and other parts where land was moved, only apparent if you really thought about the terrain. What happened there? We had no idea, but it left us very curious.

We followed the spur to where it ended, and found an old sign noting it was "closed to public travel." A gate was at the end that looked even older. Where did it used to go? It was a mystery!

We left the spur and headed to the end of the trail. It ends at a confusing, three-way intersection with Transfer Trail, where that trail has a tight curve. We took a look around and then headed back in to Grizzly Jeep Trail. 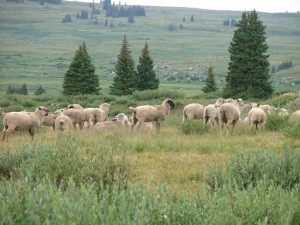 Led by Monica I.
We ran the White Owl Lake trail in two halves. We were trying to see all of the major trails in the area, and that’s just how it worked out. It ended up being a nice trail, and it would be a great addition to Coffee Pot Road if you…
Join Us!
If you aren’t a Member or Subscriber, you can’t see all of the content on this site. Get membership information to see why this site is best when you join and log in