We had already done Mount Bross, Mosquito Pass and Birdseye Gulch, and we were planning on Weston Pass, too. Birdseye Gulch took longer than we expected, and it was almost 8PM when we were getting gas in Leadville. We knew we'd be doing it in the dark, eventually, but we only lost Dave and Mike C.

We started on the trail as the sun set, which was pretty behind the Sawatch Range. The trail was pretty mellow, and the sun was completely down before we got to the pass. We were hoping to see the Perseids meteor shower, but it was raining (of course) so that was out.

It rained the whole time, so we didn't get out. We just drove the trail and chatted on the CB. When we got to the intersection with County Road 22, the group split in half. Some people were camping and planning on doing Wheeler Lake in the morning, so they headed south. The rest of us headed for Fairplay.

We aired up at the gas station in Fairplay. Ladd and Bill went up to I-70 to try to find some dinner while the rest of us headed for home on highway 285.

It was a long day but a fun one!

Use the arrows or dots to flip through the previews of the other reports for Weston Pass. Click one of them to read more and see all of the photos from that day. 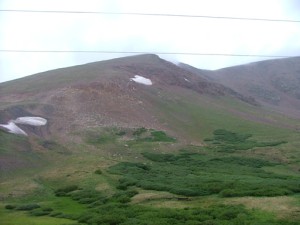 Led by Monica I.
We ran Shrine Pass, McAllister Gulch and Ptarmigan Pass earlier in the day and we were on Highway 24 at the end. We needed to be in Breckenridge for dinner so we decided to check out Weston Pass as a shortcut to Highway 285. Unfortunately it was raining as we…
Join Us!
If you aren’t a Member or Subscriber, you can’t see all of the content on this site. Get membership information to see why this site is best when you join and log in