We met in Downieville and noticed all of the snow above timberline on the mountains around us. We knew that Webster Pass was well above timberline and it had a tendency to collect snow and hold onto it, but we hoped for the best. We'd give it a try.

We started at the north end near Montezuma, and aired down at the campsite just north of the Snake River crossing. It was a little muddy and snow was still dusting the ground in shady spots, but it looked like it might warm up. With the snow on the pass, we figured we'd have it all to ourselves. We could see the switchbacks ahead of us in the valley, and it looked like it might be dicey.

We all had a good time going through the river -- some of us more than others. It's always one of the best water crossings to splash through, with a smooth bottom and clear water. Fun!

The trail up to the switchbacks was fun, and we didn't see much snow at all. However, the closer we got to them the more snow we saw. We could also see that Radical Hill was covered in snow. If it was still doable, it probably wasn't smart to put a vehicle on it. It looked like that travel on that trail might be done for the season. Of course, Colorado seasons are strange and everything could melt again before winter truly sets in.

We were about to start up the switchbacks when some ATVs came down. They came from the other side and said that there wasn't as much snow on that side. Good news! Then dirt bikes came down. In fact, we had to stop near the bottom of the switchbacks for quite awhile, waiting for ATV and dirt bike traffic to clear.

We got going up the switchbacks and the snow got up to a few inches deep by the time we got to the top. Luckily, the switchbacks on the north side are wide, with a lip on the outside. We never felt like we were in any danger, but with a bit more snow and a bit cooler temperatures it could have been too difficult.

Red Cone was covered in snow, with no tracks on it. It looked like that trail wouldn't be run again until the spring, too. Is winter here already for the high country above timberline?

We parked at the top of Webster Pass to let more traffic come up. There definitely isn't any passing room on that side, even for dirt bikes. We had to stay up there for about 30 minutes waiting for the constant stream of traffic. It was all ATVs and dirt bikes.

There was a bit of snow in places on the way down, but nothing to worry about. More of a concern were the washed out sections, where water had taken out part of the side of the trail in a couple of places. We had to drive up on the side a bit to get around them. Add to that the frequent rocks falling down past the trail from above us -- one was about the size of a basketball.

We made it to the bottom without a problem, though we took it slowly. Once on the other side, there wasn't as much snow, even in the trees. It wasn't long before we didn't see any snow at all anymore.

The bridge with the logs was muddy but not an issue. We recalled how difficult it was in the past, and wondered if it would be fixed again. We also noticed that the cabin at the mine was gone, either destroyed or burned.

The snow made the whole thing even more scenic and adventurous, but we were glad there wasn't much more snow. 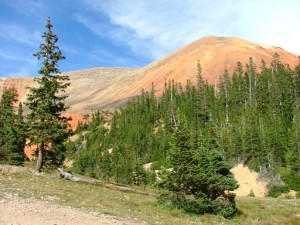