The second trail of the day looked like it would be an easy one. Matt was by himself for this run as he came off of a fun time on La Salle Pass. The drive through the subdivision at the intersection of La Salle Pass and Turner Gulch Road was very nice, with great views of the mountains and some very nice houses on five-acre lots.

The drive north was pretty easy. There wasn't enough snow to make things difficult. The views made the trip worth it.

The last mile of the trail was plowed all the way to Tarryall Reservoir. Just before getting to the water there were two sets of people camping. It seemed like it would be too cold for camping, but they looked like they were having fun.

The view of Tarryall Reservoir was great, and there were lots of people on the reservoir ice fishing. It was the perfect winter scene. 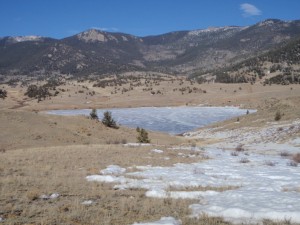 Led by Matt K.
Turner Gulch Road was the last trail for the day, and we ran it after China Wall and La Salle Pass. We all started out with vehicles that were not that dirty. But, they would not stay that way for long. The start of Turner Gulch Road had some very…
Join Us!
If you aren’t a Member or Subscriber, you can’t see all of the content on this site. Get membership information to see why this site is best when you join and log in