Turner Gulch Road was the last trail for the day, and we ran it after China Wall and La Salle Pass. We all started out with vehicles that were not that dirty. But, they would not stay that way for long. The start of Turner Gulch Road had some very nice views and it was a easy drive.

Soon, the trail was covered in snow with water running down the trail. After a few miles, the tracks from a truck that we had been following stopped and turned around, and then we only had ATV tracks going down Tuner Gulch Road. We continued, ready for a challenge.

Then, the snow started to get deeper. Matt got stuck in the deeper snow, so Walt had to pull him backwards out of the drift. After he spooled out his winch cable, Matt thought that he could make it. He was going to use low four-wheel drive. He did make it up the hill and through the deep snow that time, and had a lot of fun doing it.

After some time, even the ATV tracks stopped. We could see a cabin down the trail, so Matt made the first tracks to it and made a trail for the rest of the group. We made it past the cabin with very few problems.

Soon, the trail on Turner Gulch Road had almost no snow cover and just had dirty water running down it. It was just the right amount of dirt in the water to make all of our vehicles the same color. We all had a blast playing in the snow.

Just above the Tarryall Reservoir we aired back up for the drive home. It was a snowy, muddy, and sunny good time. 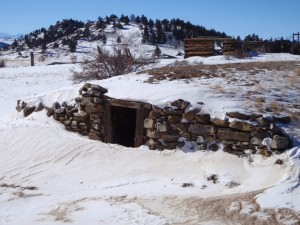 Led by Matt K.
The second trail of the day looked like it would be an easy one. Matt was by himself for this run as he came off of a fun time on La Salle Pass. The drive through the subdivision at the intersection of La Salle Pass and Turner Gulch Road was…
Join Us!
If you aren’t a Member or Subscriber, you can’t see all of the content on this site. Get membership information to see why this site is best when you join and log in