We had a great night's sleep at the Supply Basin Campground the night before, listening to coyotes. Walt came up Coffee Pot Road in the morning from his hotel in Eagle, and we didn't hang out for long before we were on our way down the Adams Lake trail a short distance. We planned on taking Transfer Trail down to I-70 and then looping back up via Main Elk Creek Road. We had a lot of miles to cover in one day.

The weather couldn't have been better. We had blue skies, warm temperatures that weren't too hot, and trails that were mostly dry. That was good news, because we knew how nasty the southern portion of Transfer Trail can be when it's wet. The scenery started out beautiful and stayed that way for most of the day. It seemed like we had the trail to ourselves.

You could see for many miles sometimes as the trail passed in and out of patches of healthy pine trees. Monument Lake was gorgeous, with blue waters flashing in the sunshine.

Soon after that, we came to the Blue Lake trail. We did that trail and then came back to Transfer Trail. Then we passed the end of the White Owl Lake trail, a place we were at the day before. Full circle!

The scenery got really interesting as we got to Quartzite Ridge. Quartzite is an interesting rock that is often in natural but very squared-off blocks. It also forms big, flat areas of nearly smooth rock like slickrock. We joked about how ancient civilizations lived there and the stone buildings had fallen to their state now. It was almost believable. It's a weird, otherworldly place.

We found ourselves behind big, stock trucks moving slowly, but they soon let us pass. There was a fun patch of rocks, and we wondered how they'd do in them. We didn't see them again until a while later. When we got to Haypress Lake, we took the trail to the other side for lunch in one of our favorite spots (this is also an amazing campsite).

We had lunch and watched a few people go by in trucks and dirtbikes, but the trail was pretty quiet. The sun was nice, and the scenery was amazing. We took our time at lunch, but then we moved on.

When we got to Bowen Lake, Julie and Walt hung out near the trailhead while Matt and Monica did the trail. Then we were all together again and heading south.

There were some muddy spots, and we didn't spend much time at Windy Point. It's too bad that the trail isn't a bit wider there, so you can spend a bit more time. After that, the trail got steep and stayed steep.

Monica told tales about how ugly the trail is when it's muddy. We saw the big spots eroded by water and where it was previously muddy, but dry it was fine. It was still a very long descent between switchbacks. This part of the trail isn't one of our favorites, but we had plans to gas up in Glenwood Springs. There wouldn't have been a place to turn around, anyway.

We worked our way down and we were lucky not to find anyone on their way up. When we were up on the Flat Tops, the weather was perfect. In Glenwood Springs, it was hot and very crowded. We stopped at what seemed like the world's busiest gas station, and Walt aired up and headed for home. The rest of us headed west to check out Main Elk Creek Road and head back up into the Flat Tops. 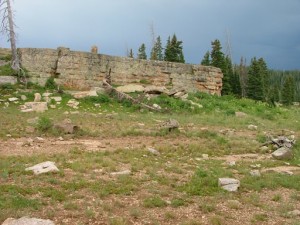 Led by Monica I.
This was the last trail for the day. It was getting late and we knew we still had lots of miles to cover before we could head back to Eagle and the hotel. We started at the trailhead off of the Adams Lake trail and headed down. It was bumpy…
Join Us!
If you aren’t a Member or Subscriber, you can’t see all of the content on this site. Get membership information to see why this site is best when you join and log in