This was the last trail for the day. It was getting late and we knew we still had lots of miles to cover before we could head back to Eagle and the hotel. We started at the trailhead off of the Adams Lake trail and headed down.

It was bumpy but still scenic as we traveled south, and soon we got to the intersection with the White Owl Lake trail. We thought there was another way by this area, but the section of trail mentioned in Charles Wells' book is now permanently closed. We accidentally ended up on the Blue Lake spur, but we didn't have time to complete it so we turned around and headed back to the intersection with White Owl Lake. After our little detour we were soon headed in the right direction.

We also saw a warning sign, noting that the trail was for "4WD High Clearance Only" but it turned out that it wasn't really that rough of a trail. It was the only warning sign like that that we saw the entire day, and we wondered why it was there and not in other places it would have made more sense.

We saw some ATVs at Haypress Lake, but otherwise we had the trail to ourselves. It was muddy, but we were enjoying sliding around. There was a section where the rocks were very strange, with big cuts through them that made them look like blocks. They didn't look real. We also traveled over a section of rock that looked like slickrock, which was also weird.

A lot of the trail was bumpy dirt road through pine trees. It would have been a nice break if the sun was out. It came out every once in awhile, and then it was free of the clouds as it set.

We popped out of the trees to find ourselves at Windy Point. It was pretty cool. The aspens next to us weren't moving, but the ones in front of us were blowing around. We walked out to the overlook and took some pictures, admiring the views.

The trail turned from fun to a little scary as it got very slick and steep. A few of us got a little sideways on the trail in places, and it got quiet as we all concentrated on the trail. It seemed like we were going steeply downhill for a long time.

The trail turned from dark, almost black clay to the usual brown dirt, and soon the trail wasn't as dangerous anymore. We could see glimpses of Glenwood Springs as we worked our way down. It was still steep as we went through a lot of switchbacks. Soon we were at the wide dirt road.

We worked our way down more switchbacks into town as the sun finally went down. We found a great Mexican restaurant and everyone was glad to be eating dinner. The trail was nice, but we could have done without the scares on the way down. Still, it was a great ending to our day in the National Forest. 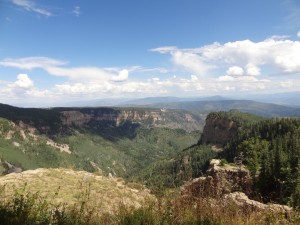 Led by Monica I.
We had a great night’s sleep at the Supply Basin Campground the night before, listening to coyotes. Walt came up Coffee Pot Road in the morning from his hotel in Eagle, and we didn’t hang out for long before we were on our way down the Adams Lake trail a…
Join Us!
If you aren’t a Member or Subscriber, you can’t see all of the content on this site. Get membership information to see why this site is best when you join and log in