We took the scenic route over Loveland Pass to Keystone and around the lake to Tiger Road. We really enjoyed seeing all of the aspen trees that had changed already, and had a great drive there. Michael had accidentally gone to the Conifer meeting place instead of the Downieville one, so he was hurrying to meet us. We beat him to the airing down spot by about 15 minutes, then we all headed up.

The weather looked good at the bottom, but it looked like it could be bad the further we went up the mountains. We did the bottom half of the middle fork of the Swan River, then turned off to go to S.O.B. Hill, and the weather was still pretty good. It was chilly, but not too bad at all.

We checked out the cabin for a bit, then turned to go up the hill. Monica went up first, a little concerned because she was now without a front locker after it blew apart the weekend before on Liberty Trail.

It seemed like things were going well, then she came to a ledge that ran all the way across the hill. It didn't seem like it was that big, but with the trail a little muddy and slick it proved to be impossible. She winched herself over it, and it didn't take much. The rest of the way up was bouncy but she made it to the top without any other issues.

Gary was next and he popped right over the ledge near the bottom. Then he went right up to the top and was finished without any problems at all. It turned out that he would be the only one who didn't have any issues.

Walt had taken his Blazer up S.O.B. Hill the year before, and though it wasn't a very easy trip up he did make it just fine. This year was going to take some work, too. He got to the ledge and also couldn't get over it, so he winched over that part.

When Walt got to the top, his rear end kept bouncing to the right instead of driving over the rocks at the top. He had to get his winch out a couple more times to get over the top, but he worked at it and made it.

Michael looked like he was going to get over the top, but then had to winch there, too. The same thing happened to him that happened to Walt.

Mike worked on the ledge for a bit but it also proved to be too slick to climb. He winched himself over it and headed for the top. His rear end bounced just like the others had, but then he tried a different line to the left of the bigger rocks. He made it that way just fine.

At this point the weather was changing and it really started snowing. It was the first snow we'd seen on the trail, and it was coming down hard. It wasn't sticking very much because it wasn't really cold enough, but it was making everything more wet and slippery.

Roger worked on the ledge and ended up having the same issues. He ended up winching over it. When he got to the top, he came right up without a problem.

Michael had heard some air coming out of a tire every once in awhile on his way up the hill, and when he got to the top he found one of his tires was flat. There was a big nail through the tread, so he changed it for his spare. It was muddy and snowy but he got it changed really quickly.

We were going to go up to Georgia Pass and take the south fork of the Swan River down, but we figured that this day was going to keep taking longer than expected due to the weather. We decided we'd take the shorter way and just go back down S.O.B. Hill instead.

The way down was definitely slick and messy, but everyone took their time and made it down without incident. We parked at the cabin and had a cold but dry lunch inside it. It ended up being pretty convenient.

We heard someone go by, then come back down after realizing they'd missed the turn for S.O.B. Hill. It's good to know that we weren't the only ones who did that (we did that last year). After we had our lunches we got back into our warm vehicles and headed back to the middle fork of the Swan River. 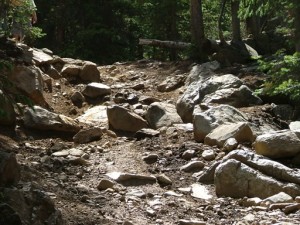 Led by Monica I.
We ran this trail at the start of a day spent exploring the Swan River trails. It was a blast! The morning was sunny and warm and the hill itself was dry the first time we did it. Then it rained all afternoon and we did it again in the…
Join Us!
If you aren’t a Member or Subscriber, you can’t see all of the content on this site. Get membership information to see why this site is best when you join and log in