We ran this trail at the start of a day spent exploring the Swan River trails. It was a blast! The morning was sunny and warm and the hill itself was dry the first time we did it. Then it rained all afternoon and we did it again in the early evening, and it was a completely different experience.

We started off up the Middle Fork of the Swan River and luckily we had the trailhead in the GPS because it would have been hard to find otherwise. There is a fork in the road and the right turn to S.O.B. Hill is marked with a brown Forest Service sign that only has an arrow pointing the way. It wasn't very helpful.

We turned right and found the cabin, then continued on past it. We didn't get too far when we realized that we were supposed to turn right just before the cabin. An ATV driver came by and let us know that the way we were currently going was a dead end not too far into the trail.

We backtracked and decided to check out the cabin while we were there. It was really nice, complete with a loft that had a mattress in it. It was one of the bigger cabins we'd seen that you could actually stay in, and one of the nicest. There was even a little backyard seating area and an old outhouse no longer usable.

We turned onto the correct trail and it was instantly rocky. Around the corner we saw the true obstacle and got out to plan our attack.

Monica went first and got a little hung up on a ledge at first. Then she went a little further and got hung up on another rock. After that it was really rocky but the rocks weren't as loose so it wasn't as difficult.

Gary came next and kept at it, making it look easy. Rob came through then and drove right through it without any issues.

Walt had his Blazer and had the most trouble. The dirt was loose and without lockers or much articulation it was difficult to get over and around all of the rocky sections. We stacked rocks here and there and he made it through to the top part.

The top of S.O.B. Hill has the biggest rocks held firm in the dirt. There is a part with a rock ledge that gave Walt the most trouble of all. With some excellent spotting he got through it, though, and he was to the top.

Bob S. and Bob R. drove through the rocks like it was easy, though they had to give it some momentum in spots. Bob S. even went over a few of the bigger rocks instead of around them like the rest of us did. Jim followed up the back of the group and didn't have any issues even though his Jeep has open differentials. Nice job, everyone!

The rest of the climb was beautiful and sunny, taking us through meadows and past old cabins on our way above timberline. After we passed the trees the trail stretched out in front of us, narrow and tippy. We even had some troubles passing some ATVs coming the other way.

When we got to the intersection with Glacier Ridge and Georgia Pass it actually started snowing a little. A lot of the Jeep drivers put their tops up, but it looked like the weather would pass us soon. We went up to the top of Glacier Ridge and had a nice lunch and enjoyed the views, though it was getting chilly.

We went down to Georgia Pass and down the South Fork of the Swan River, and it didn't take very long at all. Then we did the rest of the Swan River trails (see the other report). As we ran the trails the weather got worse, with a lot of rain and snow in the higher elevations. We decided to revisit S.O.B. Hill on our way out.

When we got to the base of the hill it was a different story, with wet rocks and muddy sections. Walt and Jim had left us on another trail, and Bob R. decided to skip S.O.B. Hill this time.

Monica started up first and immediately started slipping and sliding all over. The rocks that were moderate the first time were now all difficult, and the difficult ones were close to impossible. She couldn't make it up the last bit of rocks and had to ask for some rocks to be stacked. The run up was a blast!

Gary went next and had a bit of bad luck, sliding off of one rock directly onto another one, bending his tie rod quite a bit. That didn't stop him from bouncing and sliding his way to the top, though.

Bob S. went next and gave it lots of gas, bouncing his way to the top. He went over some big rocks again and had a great time getting up to the flat spot.

Rob was the last volunteer to try the muddy obstacle, having a few rocks get in his way at the start but otherwise getting up it just fine.

When we got to the top of S.O.B. Hill Gary worked on getting his tie rod straightened out as much as possible. He managed to get it pretty straight but it would still need some work when he got home.

We turned around to go back down S.O.B. Hill where Bob R. was still waiting at the bottom. The trip down was much easier, but you would still slide sideways when you didn't expect it. It would change your line sometimes but it made it more interesting and fun.

When we got to the bottom we went back out and aired up again, then headed off to dinner and story swapping in Frisco. This was a great trail and a great time! 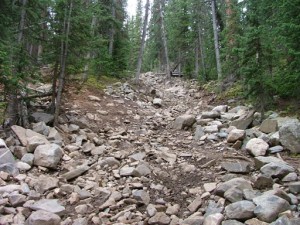 Led by Monica I.
We took the scenic route over Loveland Pass to Keystone and around the lake to Tiger Road. We really enjoyed seeing all of the aspen trees that had changed already, and had a great drive there. Michael had accidentally gone to the Conifer meeting place instead of the Downieville one,…
Join Us!
If you aren’t a Member or Subscriber, you can’t see all of the content on this site. Get membership information to see why this site is best when you join and log in