We already had some snow in Denver but we got lucky and the weekend brought us some gorgeous weather. We were prepared for snow but we ended up needing sunscreen instead, and that made everyone happy. We got to the trail pretty quickly and everyone was looking forward to the challenge.

We didn't see any other vehicles, though there were lots of dirtbikes cruising around the many trails laid out for them in the area. We got to the Guardian and we would spend our time on the trail alone.

The Guardian didn't give anyone any trouble, and everyone found their own challenge over the rocks. It's a fun little obstacle but we were ready for the big rocks.

A local police officer had stopped to chat with us as we were airing down, and he said that the trail had changed in the last year. He said it was quite a bit easier. We had hoped that it was easier for him only because he ran it all the time, and when we got there we found that it was actually a little bit tougher in places because the dirt was washing out. One tough rock in the second rock climb was moved to an easier spot, but otherwise everything was the same.

The Rock Pile really marked the start of the fun, and everyone took a completely different line through it. There weren't any particularly easy lines chosen, so everyone had a great time getting through the rocks.

We came around a corner to find the first rock hill climb and we talked about how we got through it easily the year before. Everyone took that line at the start and no one had any issues. Everyone was all smiles on the way up and over the big rocks. When we got to the top, no one had an issue getting turned to stay at the bottom of the trail, which was a nice bonus.

When we got to the second rock climb it was lunch time so we took a break. Everyone found a big rock to sit on while we ate and discussed how to get through the obstacle. Just like last time, it looks like you can just drive right through it. But even with 35" tires there are a few rocks that will catch your axles and not let you through.

Matt went through first, determined to walk right through the middle of it. He tried a few different lines but he found out that it's a bit more difficult than it looks. After a bit of negotiation he was through the first section. The obnoxious rock in the second half of the climb had moved, making the rest of the obstacle fairly easy.

Ladd went through next, remembering the smooth line we finally found the year before. Taking this line, he drove right through the obstacle.

Chad had a different idea, working his way through the far right side of the hill of rocks. It didn't go as smoothly as he had hoped it would, but he worked his way through it.

Bob brought up the rear and was determined to power his way right through the middle. A bit more gas pedal worked, and he powered his way over the rocks whenever he was just a little stuck.

We were soon all through the big obstacles and no one even touched the tree on the way by it. We were home free -- or so we thought.

Matt bumped his way over the last little pile of rocks and cruised up the steep, dirt hill to the highest point of the trail. It was a dirt track all the way back out to the road, and he was done. He waited for a bit but no one was coming up behind him, so he got out to look over the hill.

You could see that Ladd was having issues on the chunky section of rock. It was a fairly easy obstacle, but easy sections can turn difficult if your luck runs out. He was twisted and turned around, with rocks in front of him and behind him that prevented his progress. Chad used his winch line to drag Ladd sideways enough for Ladd to find another line through the rocks. He was free.

Chad tried it next but his luck had also ran out. He broke a rear axle shaft and his tire kept slipping out. He also didn't have enough power to get up the steep hill.

Ladd had been having some brake issues so he wasn't comfortable backing down the steep hill. Bob managed to get around Chad and he hooked up a tow strap to help Chad get up the hill. It worked, and everyone was out to the dirt track.

It took a bit of effort to get out to the road, of course, because the tire kept coming out. Chad would stop, jack up the Jeep, shove the tire and axle shaft back into the axle tube, and then drive slowly for as far as he could before he would have to do it again. He made it out to the road and we juggled some Jeeps around to get his Jeep onto Matt's trailer.

We all made it to Silverthorne where Chad had a truck and trailer meeting him. The rest of us had dinner and compared sunburns. It was a great day, even with the damage! 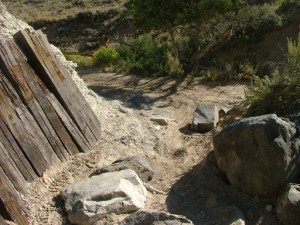 Led by Monica I.
We usually walk a tough trail like this before we ever drive it, but this time we were going to get crazy and just wheel it first. We had a small group, so we hoped that we wouldn’t spend all day on this short trail. It ended up being a…
Join Us!
If you aren’t a Member or Subscriber, you can’t see all of the content on this site. Get membership information to see why this site is best when you join and log in