We usually walk a tough trail like this before we ever drive it, but this time we were going to get crazy and just wheel it first. We had a small group, so we hoped that we wouldn't spend all day on this short trail. It ended up being a blast, and one we'll definitely run on a regular basis.

We stopped by the BLM office, but it isn't open on Saturday. We were hoping they'd have a kiosk there where we could at least pick up a map, but there wasn't anything. So we moved on.

When we got to Mulberry Hill we found a few people setting up for the Mulberry Hill Climb that was to happen on the following day. We couldn't believe that people would actually climb that hill on a dirt bike. The organizers mentioned that it was almost too steep to walk up. Wow!

The trailhead was easy enough to find once we found Mulberry Hill. We aired down and got started, excited to see the new trail.

We all had seen pictures of the railroad tie obstacles. They're definitely memorable. It's odd driving up on a wall made of railroad ties, but it was pretty cool. Neither one of the obstacles was difficult, but we could see how a wide vehicle or one with a long wheelbase would have issues.

We finally found some challenges in the Rock Pile. Monica tried a couple of unsuccessful lines before finding a good way through it. Don and Ladd followed, making it look quite a bit easier.

We stopped at the base of the first rocky hill climb and walked up it first, figuring out where we'd go to get through it. It seemed like the entrance was the most difficult part, and it definitely was. Monica took a slightly different line at the start, but it all worked. It made for some great pictures.

Monica and Don weaved their way through the middle of the rocks, but Ladd just went straight through it, getting a great wheelstand in the process.

At the top of the first rocky climb was a sharp left turn. It looked like this part would be easy, but it ended up being difficult to get turned around. We all found this to be the most difficult part, which was weird. The rocks were the smallest, but turning was difficult.

Just around the corner was the second rocky climb, and we broke for lunch. We sat in the shade, enjoying the perfect weather. There weren't any bugs at all, and we had a small breeze. It couldn't have been better.

This section started out kind of rough. Monica tried a few lines but nothing was working. Then she managed to get over the first set of rocks, only to figure out that a sharp left turn was needed. Again, that proved to be pretty difficult. Don and Ladd also had their share of issues in this spot. This is probably where we got most of our skid plate scrapes.

The middle of this obstacle didn't have as many rocks, but they were well-placed. They were usually too big to straddle, but they were in places that were difficult to get a tire on them. There was also a rough section where a rock jutted out, making it rough to get through. We definitely spent a lot of time here, but we all made it.

The end of the big rocks was loose and fun, and everyone had a good time. The tree just past it was definitely close, but no one hit it.

The twisty part was a blast, and we all stuffed our tires over and over all the way through. The Exit rocks were pretty mellow after everything we'd done, but it was still a good time.

The views from the top of the hill were pretty, but we headed out without stopping for long. It wasn't long before we were back at the main road. We stopped to discuss what we'd do next, and suddenly it was raining quite a bit. We put up tops and then it stopped just as suddenly.

We decided not to do any more trails that day, making it a rare short day for us. We aired up in the BLM office parking lot and headed out of Kremmling, and it was only 4PM. We never stop that early! It allowed for a nice early dinner in Idaho Springs, and we all got home at a decent hour.

This trail was a blast, and we can't wait to do it again! 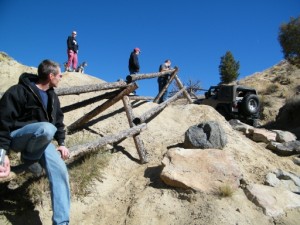 Led by Monica I.
We already had some snow in Denver but we got lucky and the weekend brought us some gorgeous weather. We were prepared for snow but we ended up needing sunscreen instead, and that made everyone happy. We got to the trail pretty quickly and everyone was looking forward to the…
Join Us!
If you aren’t a Member or Subscriber, you can’t see all of the content on this site. Get membership information to see why this site is best when you join and log in