We started the day and the year off with a group of wheelers and exchange students in the town of Cripple Creek for the Ice Festival. This year's theme was "Mythological Wonderland." The weather was nice but a little on the cold side. There were lots of people at the Ice Festival this year. We all had fun looking around at the ice sculptures for an hour or two.

One we were done checking out the ice sculptures, we started the first trail run of the year. We started Shelf Road from the north end up by Cripple Creek. We did not expect snow on Shelf Road because it has not snowed that much this year in Colorado, and we didn't find much snow. None of use had any issues on the trail. The small creek that runs along Shelf Road was frozen at the start of the trail up by Cripple Creek, but half way down the trail we found the creek had running, exposed water.

At the end of Shelf Road we stopped to have some lunch in a parking lot at the beginning of The Bank camping area. The temperature was very mild at that point, especially down by Canon City. After we all had lunch, we were off to Phantom Canyon to get back to Cripple Creek in a big loop. 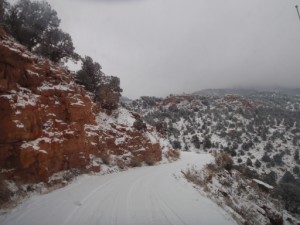