We did Kelly Flats and had some time to spare, so we decided to find Sevenmile Creek. We figured we'd start at the end, but we didn't see the road. Coming back the other way, we found it and took it.

We went in to the big intersection and turned left, but then ended up back at the main road. We gave up and just went to the end at Forest Service road 225 to start the trail in the correct direction. That ended up being much easier.

It started out fairly mellow, but then it got pretty cool. It was really closed in, with trees all around us. We went through the creek quite a few times, which also made it a lot of fun. There were quite a few open areas that were perfect for camping, too.

When we got to the first intersection we decided to see what was up and to the left. It followed a fence, and ended up being the most fun part of the trail. It was the most difficult part that we found, with lots of rocky areas and large mud puddles.

On the way to the end of the spur, Mark was going around a log but he ended up straddling it instead, dragging it to the middle of the trail. Then he couldn't back off of it, and it was too big to continue on over it. It was muddy and didn't have bark on it, and he couldn't get a tire up on it. He was pretty stuck.

He managed to get just past it, but then couldn't back up any more to get around it. It was still in the middle of the trail, so Bob winched it out of the way, back where it was on the side of the trail. Mark found out later that he had managed to mangle his oil pan in the process.

After Mark's adventure, we continued on until we found the dead end, then turned around.

We followed a couple more spurs, most of them dead-ended or looked like they were going to continue for a long time. We eventually ended up going back out and off the trail.

It was a great trail to end the day, especially with all of the rain. We were all a muddy mess! A few of us ended up at dinner in the canyon, and we sat out on a patio that jutted out over the river and ate burgers. It was a great day! 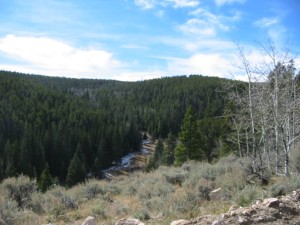 Led by Perry S.
All of our trail damage happened before we even got on the trail. Mark was having trouble with the brakes on his Toyota so he was not able to go. Bill was having trouble with a CV joint so they decided to run with their Grand Cherokee instead. We had…
Join Us!
If you aren’t a Member or Subscriber, you can’t see all of the content on this site. Get membership information to see why this site is best when you join and log in