We all met at King Soopers, and it was fun to have a run that had three different states represented (Colorado, Kansas and Wyoming). We stopped at Ted's Place for a pit stop, then again at Rustic where we decided we would only be running Sevenmile Road, skipping Green Ridge Road to do another day. Some of us decided to air down and disconnect our sway bars, and then we were off. We didn't get far before stopping for lunch at the mines in a hilly meadow.

It worked out well to stop there so we could look around the mines, and the kids really needed to run off some energy since they had been traveling for a while. It was a little cool and windy but the sun came out, and by the time we were done eating it really got nice.

We headed back down the trail were you cross the creek five or six times. It's always fun to cross running water and watch it splash around your tires as you drive through it.

The first part of the trail is very easy and nothing too exciting but the middle of the trail is a little more difficult with more rocks in the road and the trail gets a little tighter. The long wheelbase Ford had to make a few 3-point turns, and the stock Grand Cherokee had to be a little more careful than the rest of us to keep from getting too much of "nature's pinstriping," but everyone was able to find a line through it that worked for them.

We found a nice rock in a little meadow to play on and get some flexing pictures and we let the kids run around again for awhile. Everyone had fun seeing just how far their vehicles could get on the rock, then we were off again.

The last part of the trail is easy but pretty because you are driving down a narrow road with pine trees on both sides. There is also one section where you climb pretty quickly.

At the end of the trail we decided to check out the beginning of Kelly Flats since it was on our way home. The first part of that trail has some pretty good rocks and that ended up being the hardest part of the day. Everyone was glad to try something just a little harder than what we had done so far. We drove in far enough to see Heart Attack Hill and then turned around and headed for home. 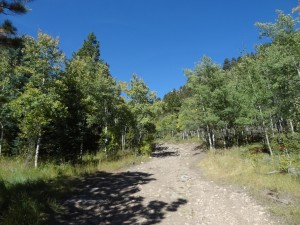 Led by Monica I.
The Mud Loop is really obnoxious in the spring, with tons of puddles, slick mud, and nastiness ready to get in your brakes and help you break things. We thought we’d escape trail damage and most of the mud by doing the loop in September. We found a lot less…
Join Us!
If you aren’t a Member or Subscriber, you can’t see all of the content on this site. Get membership information to see why this site is best when you join and log in