The last time we were on Schofield Pass was nine years ago to the day. It had been way too long, and we were really looking forward to seeing the trail again. We didn't even have a GPS track for it, so we were on an information-gathering trip, too. We planned on running it in both directions to really enjoy it as much as we could.

We did the easy half of Paradise Divide first, and then we headed into Schofield Pass. The first half is easy, and we had a mellow trip until the signs warning you that it was going to get more difficult.

We stopped at the wooden bridge to take lots of pictures and enjoy the waterfall. The water was freezing so no one waded into it, but we spent a lot of time there. It was so scenic and relaxing, and it was the first time we stopped to relax the entire day. We were in Denver that morning, so we needed a little break. I think we could have happily spent hours there.

But we didn't spend hours there, after all. We avoided the bridge and followed the trail through the water, and kept heading down the trail. It didn't seem like it was very long before we crossed the creek again and found ourselves at the top of the Devil's Punchbowl. We parked there for a bit to enjoy the scenery and check out the first part of the festive section.

We found a few dicey areas and places where you'd need to be careful, but it all looked fine. No one was coming up that we could see, so we headed down.

The worst of the rock obstacles were between the top and the metal bridge. We waited to find the big obstacle that was there nine years ago, but it was gone. We weren't even sure where it used to be. It was sad to find it gone, but it's safer now. There was still a rocky section that kept us on our toes, and it was all fun.

Monica wasn't crazy about the skinny metal bridge, but everyone else enjoyed it. After the bridge we parked in the big parking area and got out to check out the waterfall there. It was really gorgeous, and the water was a deep blue. We stayed there for a bit just enjoying the sounds.

But soon we were off again, and the rest of the Devil's Punchbowl was definitely narrow. There were no places to get around someone, and luckily we didn't see anyone. We made it out of the skinny section and into the trees without any issue.

Soon after that we found ourselves at the three-way intersection. We went out Crystal City and then back in via Lead King Basin. That meant we got to do Schofield Pass in the other direction, too. It seemed to be much easier uphill. We didn't see anyone coming down, and we made quick work of it.

This is such a great trail! We were lucky to plan a trip to Crested Butte when we had such a warm summer. It melted all of the snow, and we had a dry trail. What a blast! 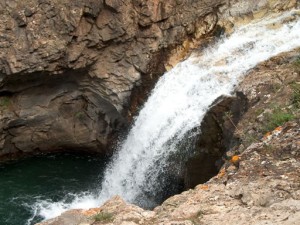 Led by Monica I.
This was one of those trails we’ve all been wanting to do for awhile. It wasn’t nearly as scary as the reports would have you believe, though. The trail has changed considerably over the last few years, making it a lot more mellow than it has been. Apparently there used…
Join Us!
If you aren’t a Member or Subscriber, you can’t see all of the content on this site. Get membership information to see why this site is best when you join and log in