This was one of those trails we've all been wanting to do for awhile. It wasn't nearly as scary as the reports would have you believe, though. The trail has changed considerably over the last few years, making it a lot more mellow than it has been.

Apparently there used to be a big rock on the side of the trail that made it really difficult to get through the Punch Bowl. It has been removed so even the narrowest part of the trail wasn't that bad. The worst of it was trying to pass other people, which got really narrow.

The obstacle in the Punch Bowl is all rock. It's not very slippery, and with a shorter wheelbase you can turn uphill into the obstacle and tackle it head on. That way you don't have any tippiness at all, either. We all drove right up it and right through Devil's Punch Bowl without any issues.

The trail is beautiful, though, second only to Lead King Basin that we ran before Schofield Pass. The waterfalls were spectacular.

This was a great trail, probably a yearly one! 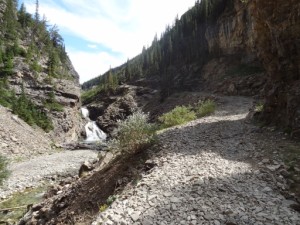 Led by Monica I.
The last time we were on Schofield Pass was nine years ago to the day. It had been way too long, and we were really looking forward to seeing the trail again. We didn’t even have a GPS track for it, so we were on an information-gathering trip, too. We…
Join Us!
If you aren’t a Member or Subscriber, you can’t see all of the content on this site. Get membership information to see why this site is best when you join and log in