We were on our way to a week of wheeling around Lake City and we stopped in Johnson Village to have lunch at the Coyote Cantina. We were finishing up lunch when Gary walked in, which was a nice surprise. He was driving by in his motorhome on the way to Lake City when he spotted our Jeeps, so he stopped to convoy with us for awhile. We stayed with him until we turned off to do Sapinero Mesa, a little diversion on the way.

It's definitely not a challenging trail, but we still enjoyed it. The weather was rainy and chilly, and that meant that the road wasn't dusty. We weren't on it for very long, though.

It was a nice trip winding through the brush and enjoying the big views. Then we suddenly went into the trees. We didn't see anyone else on the trail, and soon we were back out on the pavement.

We turned right to head for Lake City. It looked like it might be a soggy week but we were really looking forward to it! 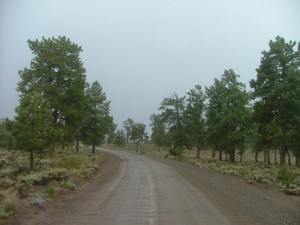 Led by Monica I.
It had been raining like crazy since we left Ouray at lunchtime, and as we left Montrose we discussed doing one last trail. It would be wet, so we probably wouldn’t air down. That could mean a bumpy ride. We still had a long way to go to get home…
Join Us!
If you aren’t a Member or Subscriber, you can’t see all of the content on this site. Get membership information to see why this site is best when you join and log in