It had been raining like crazy since we left Ouray at lunchtime, and as we left Montrose we discussed doing one last trail. It would be wet, so we probably wouldn't air down. That could mean a bumpy ride. We still had a long way to go to get home to Denver, but everyone voted for one more trail -- of course!

The trailhead was easy to find, and it started off rough. It was a mess of washboards, and we worried that the long trail would shake everything loose. It had been a long week, and everyone wanted to get home. Still, we pressed on.

Luckily, the trail smoothed out in a mile or so and it was nice. It was almost like driving on pavement.

The final grove of trees approached for a long time, and finally we got there. It wasn't a very thick forest, but it was nice. There were spur roads all over, but no time to explore them.

We soon got to the pavement, and turned left. The stretch of highway up to Highway 50 was scenic, so even that was worth it.

The drive home was crazy, with our wipers often at "ludicrous speed" to keep up with the downpour. It rained almost until we were home, making everything soggy. We stopped in Buena Vista for a fantastic dinner, and even though the day was a long one it was a great ending to a great trip. We can't wait until next time! 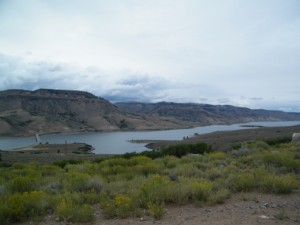 Led by Monica I.
We were on our way to a week of wheeling around Lake City and we stopped in Johnson Village to have lunch at the Coyote Cantina. We were finishing up lunch when Gary walked in, which was a nice surprise. He was driving by in his motorhome on the way…
Join Us!
If you aren’t a Member or Subscriber, you can’t see all of the content on this site. Get membership information to see why this site is best when you join and log in