We found the trail easily enough but it was a few switchbacks in before we found one big enough to park in to air down and disconnect sway bars. It was chilly and sprinkling, but the weather wasn't too bad. Next time we'll air down at the trailhead for Peru Creek where there is lots of room.

We climbed the switchbacks and it was pretty easy. It wasn't long at all before we got to the flat spot where we'd turned around in 2007. The trail was a bit wet but not a big deal. It looked like we were in luck this year.

We didn't make any stops at the mine because it was raining. So we climbed and climbed until we got to the flat spot at the top. We stopped for just a bit to take pictures of Montezuma and the valley below us. There was a bit of snow in places, but it didn't look too recent.

As we were there, the rain changed to wet snow. And then it changed to a lot of wet snow. It was even starting to stick on the trail. It was close to a blizzard -- it seemed too early in the year for that kind of weather.

We kept climbing up to the top of Santa Fe Peak and soon the snow was joined by a thick fog. We couldn't see very far, and we talked about whether that made driving on the edge of a cliff more or less intimidating. It's a bit strange when you know you're on the edge of a big drop off but you can't see it.

We got to the top of the peak and Walt was remembering a trip from years ago when he did the trail. He said that there wasn't much to the trail after that. It was really snowing and foggy, and the trail turned into one that didn't look very often used. There were small plants growing in the center of it, but it obviously saw a bit of use. Just not as much as the rest of the trail.

The first few of us continued down to the obvious destination at the mine while the rest waited at the top to hear about what to expect. When Monica and Gary got to the mine, there wasn't much to see and there wasn't much room to turn around. They called on the CB to say that they were coming back up.

Once we were all together again we headed back to the trailhead. It stayed foggy and snowy for a bit, and then we were low enough in elevation that the weather cleared up. By the time we got to Montezuma it was nice again.

We saw the trail but we all knew we had missed out on some amazing scenery. So we already have plans to run it again in a future year when the weather is a bit more cooperative. It's just one of those trails!

Use the arrows or dots to flip through the previews of the other reports for Santa Fe Peak. Click one of them to read more and see all of the photos from that day. 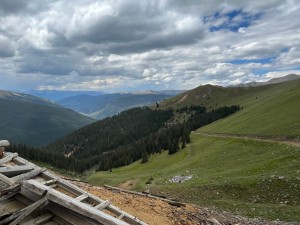 Led by Matt K.
Santa Fe Peak was the second and last trail that we ran for the day, right after a great time on Red Cone. The drive up through the trees was easy going with some switchbacks, and none of us had any issues going up. At the Quail Mine, we stopped…
Join Us!
If you aren’t a Member or Subscriber, you can’t see all of the content on this site. Get membership information to see why this site is best when you join and log in