Saints John and Deer Creek both leave from Montezuma and head up above timberline, but they do it across a valley from each other.  They're both amazing trails, and this time we did Saints John to get back up to elevation.  Naturally, it was gorgeous.

We saw a few people camping and enjoying the trail all the way to the end.  We went through the little community on the trail, and then we didn't see civilization again for a while.

For the first time, we saw the mountain goats well below timberline.  We usually see them up on Wise Mountain, but this time they were grazing below the switchbacks.  A new Grand Cherokee with paper plates was headed down, and we were impressed.  They were also completely distracted by the goats.

The switchbacks were chunky and fun, but it wasn't long before we were at the top.  The weather there was completely different than it was on our last trail and in Montezuma.  Below timberline, it was sunny and warm with not much of a breeze.  Up on top, it was very windy and probably around 50 degrees.  And the blue skies were starting to cloud over.

We started to see many side-by-sides on the trail.  It would be a good place to be in an OHV, because it is a large network of trails.  We all managed to get around each other on the flat spots between the steep hills.

Almost to the end at the intersection with Swan River, we saw a huge collection of OHVs in the distance, with a smaller group we were catching up to that was parked in the trail.  As we got closer, one did a donut on the short, fragile grass well off of the trail while another drove around on it.  Then they threw a beer can down the side of the mountain and headed off.  It was the only bad behavior we'd seen all day, and it was a shock.  Luckily, we don't see much of that anymore, but it does seem to go with drinking and driving.

They caught up with the rest of their huge group, and we watched them all turn to go down Swan River.  We were headed that way, but we went up to the Wise Mountain cabin instead so we could put a little distance between us and the rowdy group.  We were glad we did, because we found the cabin completely caved in on the inside.  Apparently it fell into a mine shaft.  It is not usable now, and it is dangerous.  It was also odd to not see any mountain goats at the cabin.

When we eventually wandered back down to Swan River we caught up with the group again, and it was raining hard.  We slowly followed them down to their huge camp spot near the end of the trail.  Apparently everyone isn't following the coronavirus guidance.  We still really enjoyed the trip over the mountain. 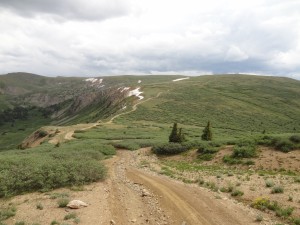 Led by Monica I.
We left from the tiny town of Montezuma and headed uphill. We talked for a moment about doing Hunkidori Mine, but we planned on wrestling with S.O.B. Hill later so we skipped it. S.O.B. Hill proved to be too difficult in the rain and mud, so it turned out to…
Join Us!
If you aren’t a Member or Subscriber, you can’t see all of the content on this site. Get membership information to see why this site is best when you join and log in